Since Nina has agreed to be her husband’s smoke-filled incubator and nothing more, he’s left with the responsibilities of tricking out the future kid’s nursery, and as someone with external genitalia is obviously totally unfit for the task. Look at the little lost lamb, wandering around Manhattan with a giant stuffed bear, mewling for help! If you didn’t know anything about these characters, you might imagine that this is the start of some sort of sexy sex affair between Scott and Margo, but since this is Margo we’re talking about she’ll probably just end up berating him again like she did in 2006: 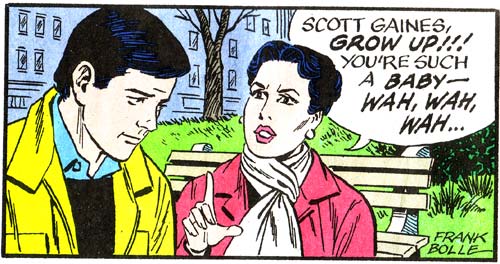 Haha, how much do I love that panel? A lot, is how much!

Ha ha, yes, it’s funny that hockey goalies wear masks that make it difficult to tell who they are, despite the existence of other cues such as height and build, but I think we’re all missing the important point here, which is that Coach Kleats thinks that saying “Now I really want you to block that goal” imparts useful information about goaltending. I mean, I know what with the budget cuts he’s got a lot on his plate, but sure he could do a little online research and come up with some slightly higher-level jargon?

Oh, man, can we count all the amazing things in today’s Mary Worth? Let’s start with the classic word-sequences-that-would-never-be-uttered-by-humans “middle-management sales” and “I still can’t believe the events that led to Nola’s promotion!” Then there’s our male gossip’s hilariously exaggerated gestures and facial expressions; he appears to be auditioning for a nonexistent vaudeville revival circuit, in his mind. And of course there’s also his female counterpart’s bright blue hair, framing her sad, worn-down face. Probably she dyed her hair blue six years ago when she got this corporate job, as a last act of defiance to reaffirm her identity as someone vaguely cool; and yet here she is, having kept that color more out of habit than anything else, carping pettily about the new vice president of sales, without a hint of irony. These people deserve Nola, is what I’m saying.

Man, I wish I could get people to start referring to my naps as “the fabled Josh-sleep.” None would dare wake me then!