I’m more than a little embarrassed to admit how much time I spent trying to figure out this Pluggers. Was there some site in the Belgian Ardennes where part of the Battle of the Bulge took place that had a name that sounded vaguely like “à la mode?” Eventually I figured out that it was just a dumb pun on “Alamo” because pluggers have only the vaguest sense of history, but know they saw something about couple o’ battles on the History Channel once, and also they eat ice cream compulsively. I HATE YOU MORE THAN EVER PLUGGERS.

One of Mary Worth’s sinister missions is to present brief quotes from radicals and weirdos in an attempt to make them seem bland and unthreatening. Today’s epigraph comes from a parallel universe where John Lennon wasn’t assassinated but instead took up a new career as a corporate motivational speaker.

Oh look, the snowman is frowning because its very body is liquifying! It’s sad because it’s helpless to prevent its own horrible death, plus there’s some kind of monstrous demon-thing on its head grinning maniacally as it crumbles. This is a whimsical cartoon for children! 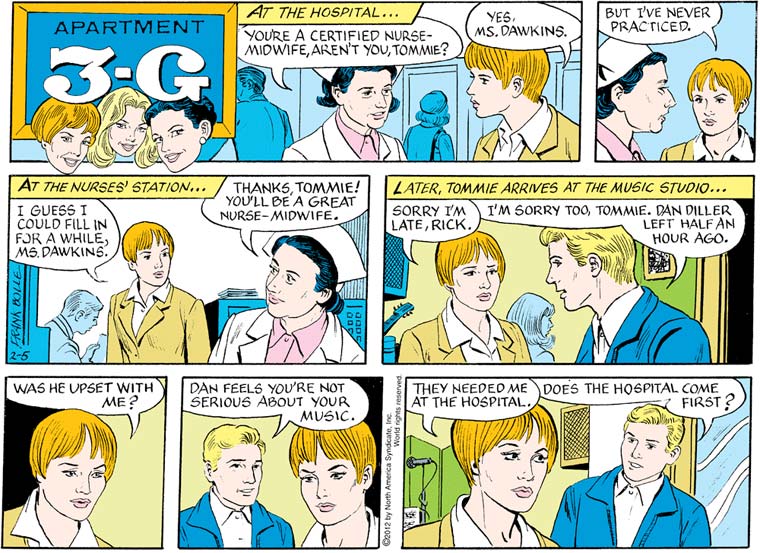 Ha ha, I’m really loving the way that Apartment 3-G, despite its dated aesthetics, is embracing America-in-decline’s warped values. “Whatever, Tommie, I guess saving lives and helping bring new babies into the world is just soooo important that you don’t have the time to churn out some forgettable pop hits that could make you and the multinational conglomerate bankrolling you a crapload of money. I’m not mad, just disappointed.”