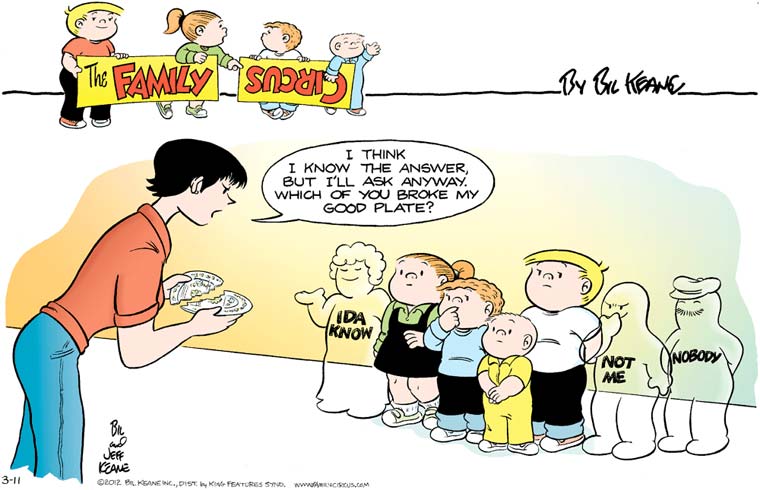 The Keane Kids’ responsibility-dodging spirits vie with the Billy’s dotted-line trails for the title of the Family Circus’s most iconic gag. Still, while Ida Know and Not Me are fairly well known, I don’t think Nobody shows up so often, which may explain why I was so surprised and horrified by his creepy mustache. I mean, the mustache and the hat already combine to make him look like your slightly skeevy uncle, if your slightly skeevy uncle were three feet tall and a ghost; but, since he has no visible nose or mouth, the mustache is just a stripe of hair across a mostly featureless face, which is completely terrifying to me.

On the other hand, I approve of the way that the children and their daemons have been lined up against the wall, since it appears that Mommy has finally had enough and is just going to have them executed by firing squad for their dish-breaking crimes.

Longtime readers of the Funkyverse strips know that one of that fictional universe’s most prominent characteristics is the relentless and omnipresent punning. Today, however, we see that this behavior may in fact have an evolutionary advantage. The first three panels of the strip feature Jeff getting increasingly angry at yet another instance of injustice, looking like he’s about to strangle someone or at least suffer a major coronary event. But in the final panel, Pam’s terrible bit of wordplay seems to have flummoxed him, knocking him out of his rage-cycle and leaving him in a state of slant-mouthed confusion. How many lives were saved by her quick, corny thinking? 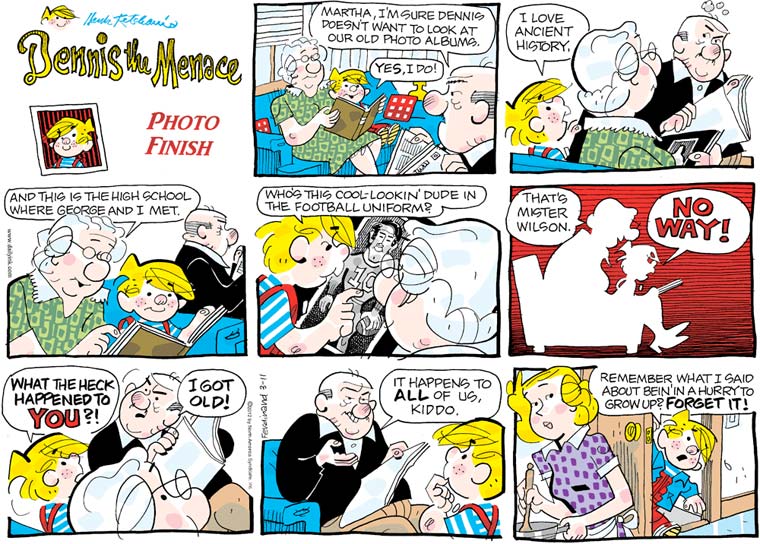 We spend a lot of time worrying about whether Dennis has lost his menacing vibe, but what of Mr. Wilson? One might worry that the lack of a worthy antagonist has caused the old man to lose his edge. But fear not, as today he manages to implant in Dennis that special shiver of existential terror we all get when we first realize that we, too, will grow old and die. I dearly hope that the otherwise unexplained photo of Dennis in the opening throwaway panel represents a Portrait of Dorian Grey-style magical object, which will wither and age while Dennis stays young, until it comes time for the Devil to reap his soul; that would be menacing indeed.

Well, Nola, if you won’t listen to good advice from John Lennon, maybe Jesus will talk some sense into you, hmm? If nothing else, the relative efficacy of these two quotes may resolve some longstanding debates.