Cookie has always been something of an anomaly among the denizens of Camp Swampy; he never appears in uniform, so one assumes that, like Miss Buxley, he’s a civilian employee of the military rather than a soldier himself. My grandfather was during World War II a stateside Army cook who was actually in the Army; I’m not sure when that stopped being a thing, but presumably it was during the post-Korea/pre-Vietnam era during which most of Beetle Bailey’s now thoroughly outdated tropes arose. One assumes that today Cookie receives his paycheck from a Halliburton subsidiary.

But while he may not be under military discipline in a strict legal sense, it appears that he’s required to do the bidding of whoever’s around with the highest rank. Today’s strip, for instance, is much more than the typical ha-ha-Sarge-sure-likes-to-eat because of Cookie’s look of quiet despair. He knows he’s killing Sarge calorie by calorie, knows as he stares into that pan that he’s troweling grease onto Sarge’s arteries every morning. He’d like to suggest a healthy breakfast once in a while, but he’s duty-bound to produce 1,190 calories, as ordered. But he doesn’t have to be happy about it.

The beginning of this current Mark Trail storyline has promised nothing but a little aerial photography of the greater Lost Forest region, which, once it became clear that Mark was not terrified by the notion of mechanically assisted flight, did very little for me. But now the real action is starting, and that action involves what I assume are marijuana plants that are about to be spotted from the air, and that action will be awesome. Hey, generic khaki-clad baddies, do you know who would recognize marijuana? Mark Trail! Prepare to get punched something fierce! 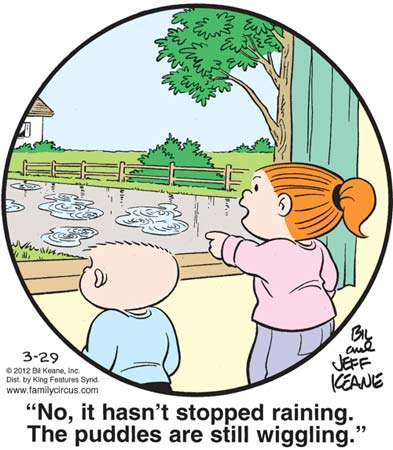 Skynet has sent an army of T-1000s from the future to attack the Keane Kompound, which should make us question whether it really hates humanity as much as we’ve been led to believe.

“And his thirst for brown liquor!”