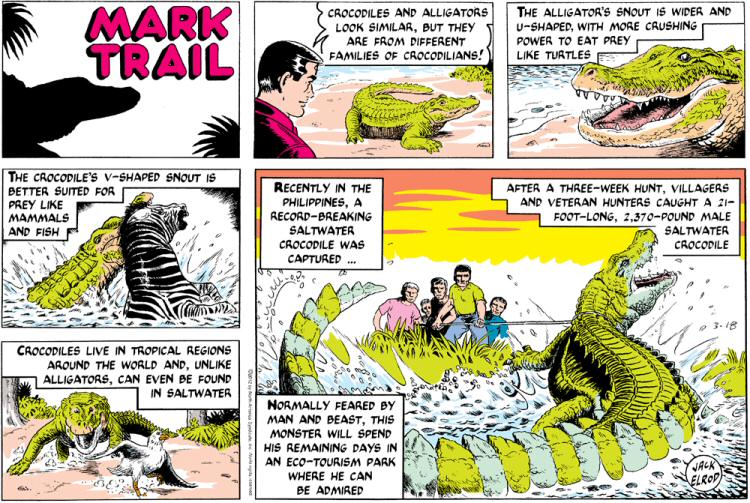 Yes, “… this monster will spend his remaining days in an eco-tourism park where he can be admired.” There’s so very much to admire about this ravenous ocean brute: his winning smile, obvious relish munching on that poor doomed zebra, determination to run down a tasty bird-snack, and handsome striped tail thrashing in anguish as strangely impassive villagers reel him in. Sure, maybe he can’t crush a turtle, but let’s not quibble.

So if you ever find yourself in the vast, impoverished marsh district 500 miles southeast of Manila, stop by and check in on our pal here — but if you do, take a Nature Tip from Mark Trail and stay indoors at all times. Seriously, you could get killed out there.

Speaking of monsters, check out the Blondie-narwhal. Crocodiles of the deep, you have been warned! YOW!

Psst — the bird did it. Killed the fish, too! Ask the spider.

My favorite parable is the one about the Unjust Steward (Luke 16:1–13), in the telling of which Jesus appears to endorse sharp dealing, hanging out with a bad crowd, and outright fraud. Its deeper message is that children of God should be as practical preparing for the Hereafter as children of mammon are for the Here and Now.

In this Sunday-only (natch) comic, child of God Dag is so mightily upset that his bosses (Wilson and Cassidy) think he should set out on his own that he threatens to, um, stay? Maybe a little more attention to the Things of This World wouldn’t be such a bad thing? Things like punchlines? 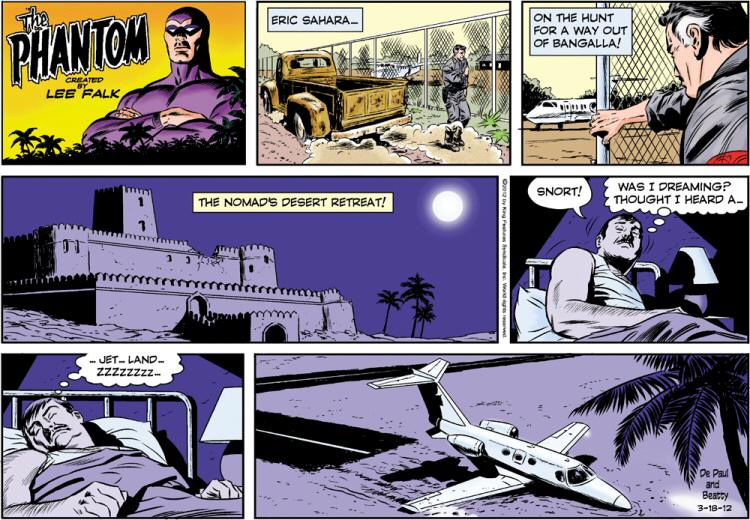 It’s hard out here for a Nemesis. Injured during his botched Phantom-killing mission, Eric Sahara (The Nomad!) hitchhikes back to his jet and scuttles off to his ramshackle desert retreat — the one with the sharp left turn in the airstrip. Seriously, his badass predecessor Chatu would just be embarrassed.