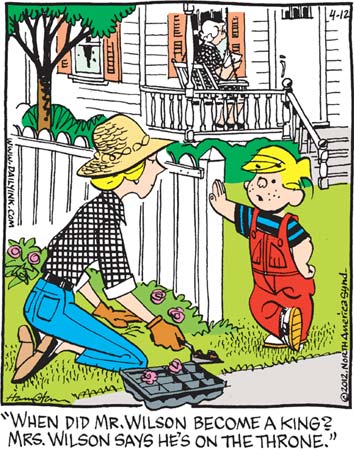 Yes, ha ha, Dennis tried to annoy Mr. Wilson while Mr. Wilson was going to the bathroom and Mrs. Wilson actually prevented this from happening for once. But wouldn’t it be a million times more awesome if Mr. Wilson had actually snapped and decided he was one of history’s more obscure kings (Louis XI of France, say, known to his people as “the Universal Spider”), had purchased a throne on eBay, and was currently sitting on it in his living room, barking out deranged orders to his nonexistent subjects? It would be a million times more menacing than anything Dennis had ever done, unless you count Dennis’ undoubted contribution to his insanity as the root menacing cause of the situation.

“Wait, no, that emphasis is kind of stilted, right? Let me try … ‘We are already here — surprise!’ Yeah, that sounds much more naturalistic. OK, mister, can you say your sentence again? Try to still act surprised when I yell surprise, it makes it more fun.”

“Ha ha, get it, because old people are old, like fossils are old? Old people? Ha ha? Seriously, though, I’m having lots of trouble pooping, so hand over the prune juice pronto.” 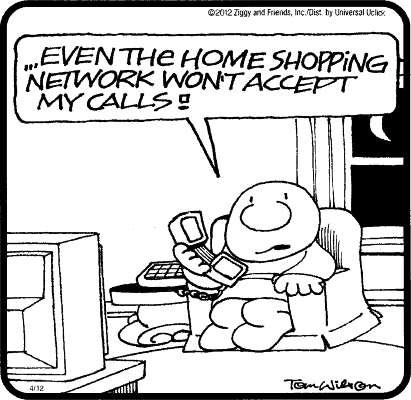 The Home Shopping Network is a for-profit business whose margins depend on its operators taking customers’ payment information as efficiently as possible. They can’t afford to talk to sad, hairless gnome-men calling just because they’re lonely and need to hear another human being’s voice.