We here at the Comics Curmudgeon spend a lot of time ragging on long-running legacy strips, which decades ago ceased to be the work of an artist/visionary and are instead staffed by hired guns in the employ of the intellectual property owners. But we don’t say enough about the advantages of this kind of working environment! Let’s say that, back in the summer of 2006, you come up with a funny joke — ha ha, did you know that the youth of today will pay good money for pants that are already torn up? mercy! — only to discover that lots and lots and lots and lots of your fellow cartoonists had the same idea! So you’d probably chuck it and try to come up with something else, if you were just working on your own. But if you were a cog in some legacy comic’s great machine, you’d have an advantage over your lone wolf competitors because you’d have access to what sociologists call “institutional memory.” You’d just file the joke idea away in the company Outlook calendar, and set an alarm for when everyone’s long forgotten about haha-torn-jeans jokes. Five years should do it, right? Let’s call it a shade short of six, just to be safe. Come 2012, whoever’s got your job (lord knows it won’t be you) will see the alert pop up and have the day’s strip already half written. 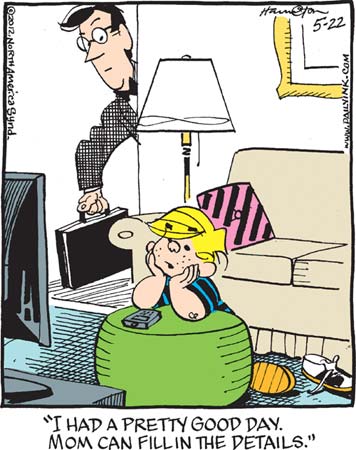 “Mostly I’ve just been in here watching TV, so I guess there really aren’t that many details to fill in. Hey, since you’re up, would mind wiping up the drool-puddle I’m leaving on the ottoman?”

Don’t worry, comic-book action fans, the current Spider-Man plot isn’t just going to be about how Peter Parker feels sexually threatened when his wife talks to handsome men! It’s also about how he feels inadequate when he talks to other superheroes.