Whoops, Avery Blackstone isn’t some WASPy villain bringing danger and intrigue into our heroes’ lives! No, he’s going to inconvenience them, by bringing them money. People showing up unannounced to hand sizable checks to Judge Parker protagonists that they did nothing to earn are honestly one of the primary drivers of drama in this strip. 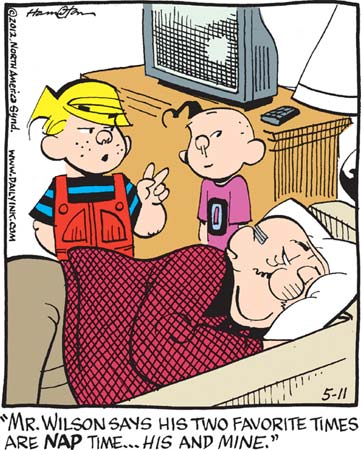 Mr. Wilson likes his nap time because that brief moment of obliteration of consciousness reminds him that someday he’ll finally enjoy death’s sweet embrace, and he enjoys Dennis’s because it reminds him that Dennis too will someday die.

Aw, now that Rusty knows that he’s been abandoned, again, he’s not even bothering trying to look halfway nonhideous anymore, but just going straight out with the “demonically possessed ventriloquist dummy” look, complete with hair stained red with the blood of his victims. Later, Mark goes and confers with an honest lawman whose job is to put people in prison if all the evidence is against them, unless they’re friends of Mark Trail, in which case he’ll just violate any and all confidentiality rules and spill his guts about everything!

Speaking of demons, what started out as a vaguely cute Gasoline Alley story about Slim and Clovia taking in a mischievous orphaned kitten has turned into a harrowing fable about good and evil and free will, with the cat being tormented by a sinister feline devil who is constantly forcing him to do awful things. Today, the cat begs to be absolved for the evil it’s done. But is the demon-cat a supernatural outside force, or just the representation of his own untrammeled id?