Based on all the mean things I say about it, you might think that I don’t really look forward to reading Funky Winkerbean every day. Nothing could be further from the truth! For instance, for the next several months, I’ll be eagerly anticipating the strip in which Les lies gasping and semi-conscious on the rocky ground about a third of the way up Kilimanjaro, and Bull, shaking his head, slowly peels off his friend’s sweat- and blood-stained socks, says “I guess you never deserved these,” and begins to walk, receipt in hand, towards a distant Nairobi Wal-Mart.

It’s really quite sad that the audience got bored with this little tussle and left before it ended with Spider-Man humiliated and his enemy strolling off in triumph. I guess most people don’t derive the same joy at watching Spidey getting defeated by obvious losers that I do? 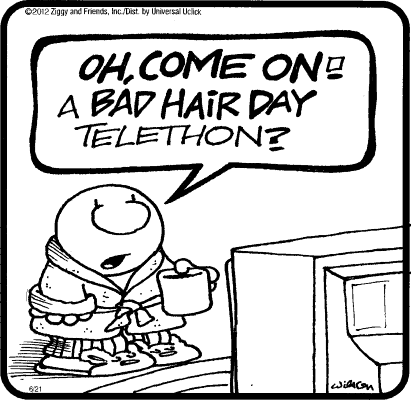 Today’s Six Chix was only published after several rounds of editorial revisions, which softened its original pro-heroin message considerably.