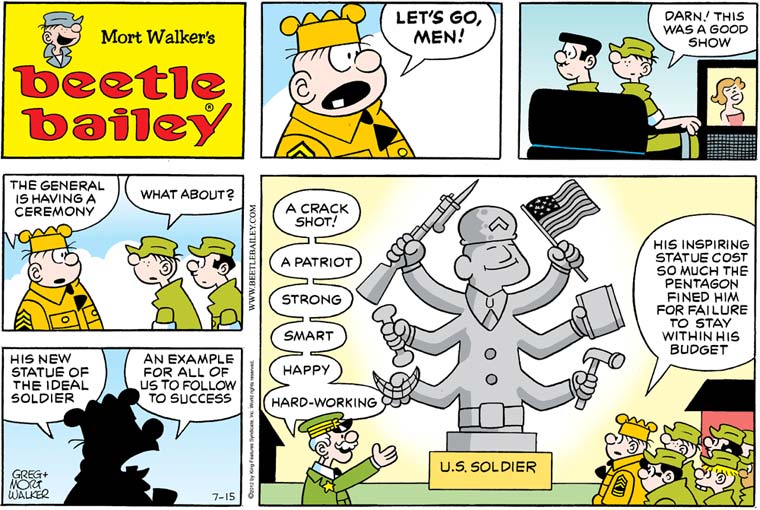 To westerners, the most distinctive aspect of Hindu deities is the fact that they’re usually depicted as having many arms. This is meant to be understood allegorically — we use our hands to wield tools and otherwise impose our wills on the outside world, and the gods and goddesses, being more powerful than us, have more capabilities to impose that power. These deities are also often depicted holding holding in their many hands objects or icons that represent their various attributes, which is remarkably similar to the artistic tack that General Halftrack has taken here. On the other hand, most Hindu devotional art manages to depict a humanoid figure with many arms without making their torso freakishly extended like the General’s statue’s, and the idea of having the soldier depict happiness by holding a terrifying disembodied grin is an innovation in this particular sculpture.

This is also a strip where the noble if eccentrically executed sentiments of the main gag are undermined by the throwaway panels. Behold the virtuous American soldierly ideal, contrasted with actual soldiers, who respond sullenly to orders because they’d rather sit on the couch watching pretty ladies on TV. Why does Beetle Bailey hate America, is what I’m saying. 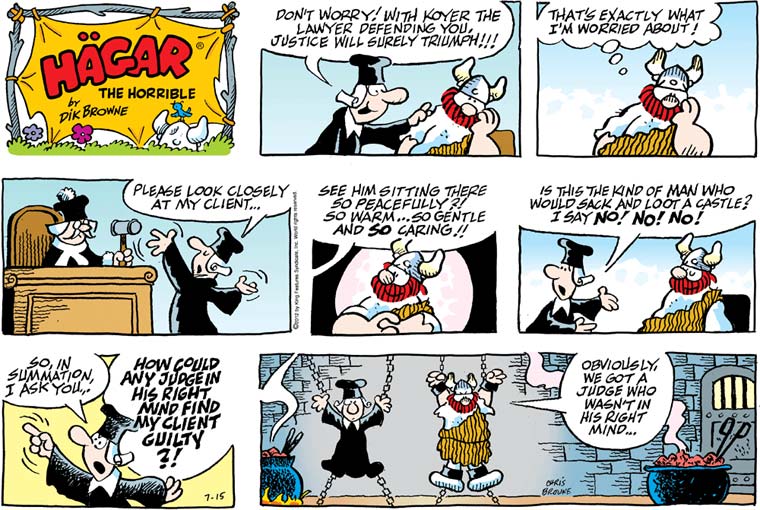 Meanwhile, I’m having a hard time parsing how I feel about the politics of this Hagar the Horrible strip. I mean, yes, Hagar is guilty of monstrous crimes against humanity, leading murderous armed bands in multiple expeditions of violent plunder that don’t even have the flimsiest of ideological justifications, so he really should be hauled before whatever the late Carolingian equivalent of the Hague is. On the other hand, the depiction of the dungeon is particularly grim, even for a strip that routinely uses torture as a punchline — hey, see those tongs stuck into the big cauldrons of red-hot coals? GUESS WHAT THOSE ARE FOR — and of course one shouldn’t imprison lawyers for the crimes of their clients, or else the whole adversarial legal system is pointless. “Life in the 9th century is brutal” is I guess the overall theme here. 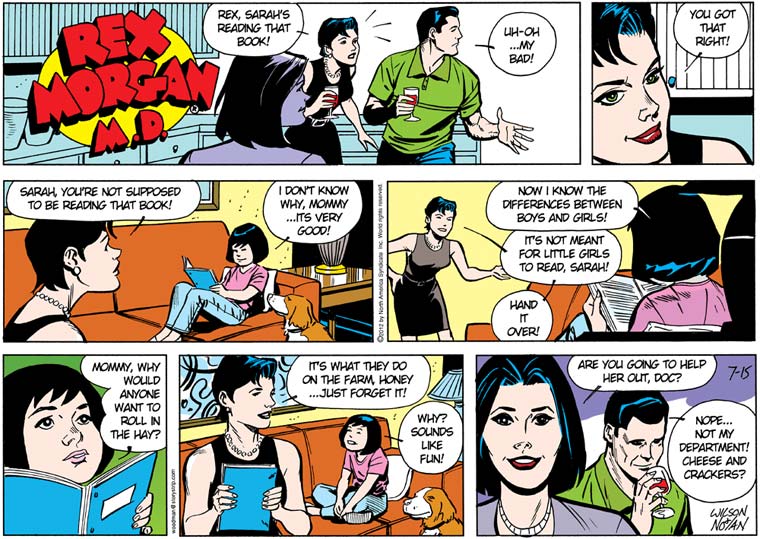 You know, all this time everyone’s been raving over poor dead alcoholic Foster’s book, but I’m beginning to think it may not actually be very good. Specifically, any book that contains enough blunt anatomical detail for a six-year-old to follow easily but also uses the cliched euphemism “roll in the hay” seems like it would be kind of muddled. Unless Sarah means that it’s taught her the difference between boys and girls … emotionally? Based on what we know about Foster’s marriages, this information is bound to be dubious, though it may help Sarah navigate her own domestic situation. “Mommy, now I know why you’re always trying to sit closer to Daddy on the couch but he keeps moving away and then he goes into his office and you drink wine and cry!”