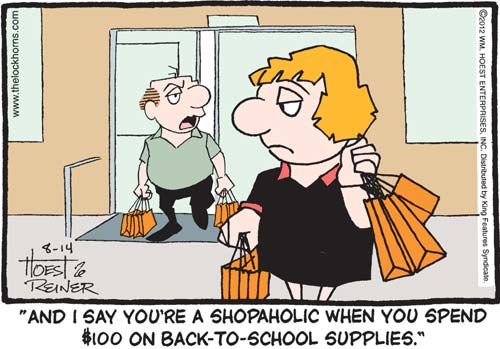 One of the twisted, dysfunctional “games” played by George and Martha, the main characters in Who’s Afraid of Virginia Woolf?, is talking about their non-existent son. They each tell stories about him, making things up as they go along to create a fuller picture of him; but, as in all improv, the rule is that each has to take the other’s story as canonical. This is a private game, though, and when Martha starts playing it in front of another couple specifically to annoy George, George retaliates by telling her their fake son died in a car crash.

This is a long way to point out that, like George and Martha, Leroy and Loretta don’t have any children either. So I suppose that whatever just happened in that big box store was some variation on George and Martha’s game — a little less creepy, perhaps, but a lot more expensive.

I’m actually really enjoying this “Curtis and Barry are trapped in an apartment with a dead lady and a bunch of cats” storyline, as it’s the strangest and more interesting thing to happen in the strip since Kwanzaa. Still, I question whether old people actually have more lightbulbs on hand than younger folks, and I also would have enjoyed seeing the Wilkins boys come up with an adult diaper-based escape plan.

I’m really looking forward to violent class war breaking out in Riverdale! Which of the town’s proletarians will abandon class consciousness and side with their capitalist oppressors? Reggie? It’ll be Reggie, right?