Today’s strip truly shows the limits of Slylock’s philosophy, and indeed of his life’s work. Sure, his keen powers of observation have allowed him to easily identify the defects in the new royal timepiece. But his simplistic deduction can’t help uncover the structural defects in Princess Pussycat’s government that have contributed to this debacle. What are the flaws in the government contracting process that allowed the monarch to spend thousands of tax coins on a luxury item that doesn’t even work properly? Shouldn’t there have been some sort of inspection before money changed hands? Does the freakish long-necked bird-person have a good reputation in the clock-building world, or did he get this job by personal connections or through a bribe to a lower-level government official? And of course, now that he’s gotten that sack of money, it’ll take more than a little ratiocination to claw it back from him, shoddy workmanship or no.

Oh, the silly, superstitious cave-man, running off in terror because he believed a bleached, dried human skull was speaking to him! In fact, the talking was coming from two giant ants inside the skull, and they were talking to each other, in English, which isn’t something to be scared of at all. 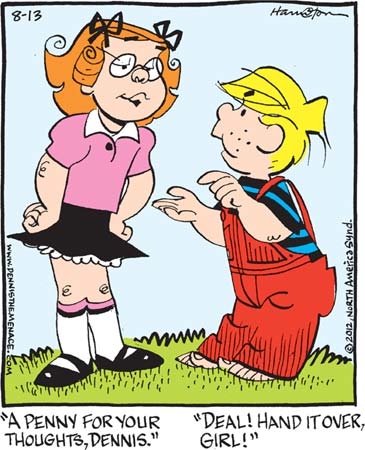 Dennis is eager to close this deal, since he knows from experience that his thoughts and opinions aren’t worth anything. 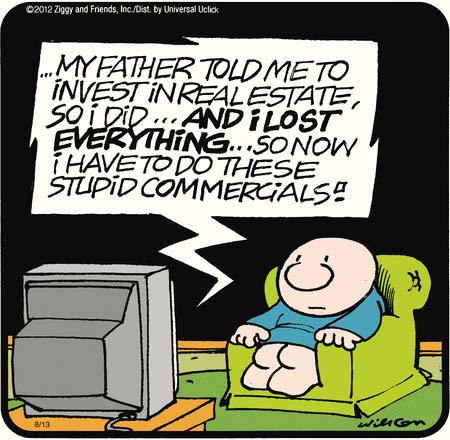 In order to feel better about himself, Ziggy has started watching the Failure Channel.

Say, do you enjoy the overall oppressive sense of gloom that hovers over Funky Winkerbean, but feel that the strip falls down on the job wen it comes to having its less appealing characters sharing way too much personal information and whining about not getting enough action? Well, today’s strip is for you, my friend!