Say, did you hear the one about the one-armed golfer? He was the subject of this summer’s Gil Thorp storyline, which turned out to not be that interesting! Wrapping up briefly: we learned that One-Armed Steve was full of rage because he did in fact lose his arm in a non-heroic fashion (car accident while on a military base overseas), and his attempts to woo Molly Kinsella failed not because he was an amputee but because he’s a grown man and she’s still in high school, gross. But all that psychic pain was nothing a little match play couldn’t cure, so Steve got cleaned up and has learned to love life again. So instead of getting a real job and getting back on his feet, he’s going to become yet another Milford community member offering the high school no-cost coaching services! It’s a win for everyone, but mostly for Gil.

And now our fall drama is taking shape! Anita Visci is taking cookies to her new neighbor … who refers to them as “biscuits,” which means that she’s English, probably! Will her son refuse to play decent American football and instead demand equal time for his British freak sports, like rugby or cricket or punting? Will Maeve take the pram to the lift on the telly in the boot or whatever? Stay tuned! 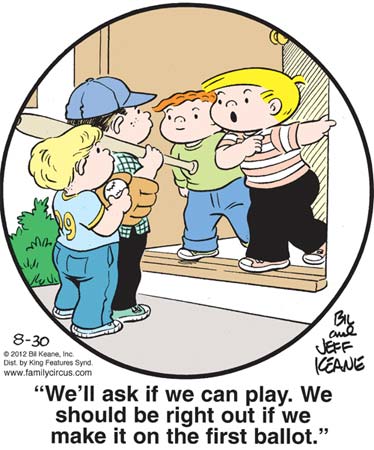 Ha ha, yes, we all know little kids all over this great country of ours will be glued to the tube for the next couple of weeks, thrilling to the minutia of parliamentary procedure! Actually, this cartoon is kind of dating itself, as the last presidential nominating convention where there was realistic suspense about how things would go on the first ballot was (I think) in 1980, so maybe kids were smarter then?

Dagwood has gone through all the trouble of baking a pizza in an oven, and yet he’s still leaving his hat on while he eats. I don’t know why this bothers me, but it does.