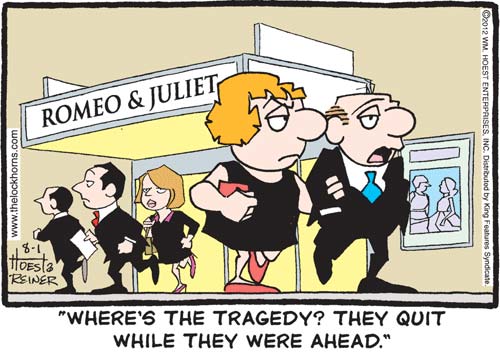 Call the Lockhorns hackneyed if you must, but it can still take us to depths of relationship hell that we never imagined existed. I mean, just think if you were at a place in your marriage when you thought, “God, I wish we had gotten that murder-suicide pact nailed down when the time was right. But what’s the point, now?”

It’s Marvin’s 30th anniversary, and from this day forward, I will no longer think of him as a horrible brat-child glorying in his inability or refusal to poop in a toilet. Instead, I will pity him as a victim of a capricious creator who for whatever perverse reason delights in forcing him to stew in his own excrement.

You may be alarmed to learn that Shoe is having sex with his golf clubs. Personally, I’m even more unsettled to discover that he’s getting emotionally attached to some of them.