Good morning, everyone! I’ve returned from my week-long comics-mocking sabbatical, and what better way to jump right back into the icy waters three-panel laffs than today’s Luann? Yes, Brad DeGroot has at last come into his own, lounging about in his tough-guy tank top, showing off his biceps and his fire department tattoo, running a comb through his greasy hair. The effect is somewhat undermined in panel one because that tank top looks long enough to be a cocktail dress, but still, let’s let him have his moment.

Now let’s swim into full-on horror by moving on to Momma! Today’s strip is fantastic because just when you settle into a nice bit of disgust at the phrase “seeing some other mother,” you realize Francis is emitting audible groans of satisfaction and you want desperately to return to a world where the worst you had to deal with was a little light Oedipal humor.

Dagwood’s look of befuddlement shows that there can still be surprises in a marriage that’s lasted more than 80 years, and that those surprises are terrifying. “Wait a minute,” he seems to be thinking, “I’m the one in this marriage who goes on ‘wacky’ food binges in a doomed attempt to fill the yawning emptiness inside me. If that’s not my role anymore, then what am I?”

In an example of the meticulous attention to detail that has made Walker-Browne Amalgamated Humor Industries LLC famous, the irony in Hagar’s statement is driven home by the blasted, barren landscape his savage warriors trudge across, all the crops having been burned during the course of his band’s predatory raid.

Oh, goody, there have been 25 years of Crankshaft, so we will now be treated to some Crankshaft flashbacks! Nobody, not even Crankshaft himself, thinks this is a good idea. 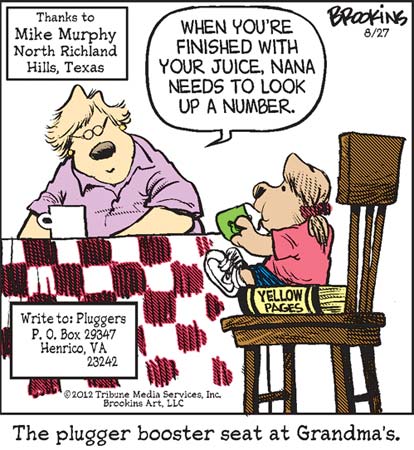 Hey, all you fancy-pants city folks with your computers! A little girl can’t sit on the dog-goned Internet, now can she? Check and mate!