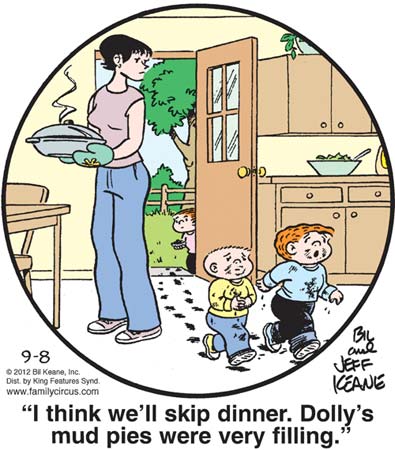 Oh, God, something horrible happened outside, didn’t it? Those aren’t the faces of little kids who were having some fun out in the yard; those expressions are of illness and queasy terror. And then there’s Dolly, standing in the doorway, staring at them, marking their words. “Are they telling Mommy? They were specifically ordered not to tell Mommy. They know the punishment for telling Mommy: More mud pies. More mud pies. You don’t know the meaning of the word ‘filling,’ Jeffy.”

Hey, everyone, the Professor’s back! Back from … I dunno, did he go somewhere? I guess he did, they made a big deal out of his return earlier this week. Anyway, now he and Greg are bonding over their shared heritage, which seems to be causing a stone-faced Margo to vibrate with hostility in the final panel. Is she about to unleash a series of vicious anti-Greek ethnic slurs that will result in her being forever blackballed by the cabal of Hellenes who pull the strings of New York’s PR industry?

The moral of today’s Wizard of Id: Don’t be lured into complacency by the false promise of nonviolent agitation for radical change! Violent expropriation of the rich’s wealth is the only path to successful class war.