I had almost forgotten that Rusty had blabbed to Cherry and Doc about the sheep-killing miscreants, which I think is understandable because it’s natural to assume that even Rusty’s adopted family would want to keep interactions with him to a minimum. But anyway, this explains my initial confusion at Cherry calling the men stealing away her ward as “poachers” rather than, say, “kidnappers.”

Though considering the Trails’ wildlife focus and their apparent refusal to legally adopt Rusty or send him off to school or anything one normally does with a child, perhaps poaching is a good word for what Cherry thinks is happening here. “Oh, no, those poachers have got the Rusty! It’s a particularly ugly specimen so it’s not much of a trophy, but its pelt and gallbladder could probably sell for good money on the black market.”

Whoah, you guys, it turns out that Irish people don’t just call cookies “biscuits”; they also have different parenting styles! I see some cross-cultural misunderstanding hijinks in the making here. Is the lesson of this fall plot going to be “American teens have their souls crushed because their parents don’t want them to die” or “foreigners don’t love their children enough to smother them”? Or will we lose interest three quarters of the way through the season when the Mudlarks make a half-assed run at the playdowns? 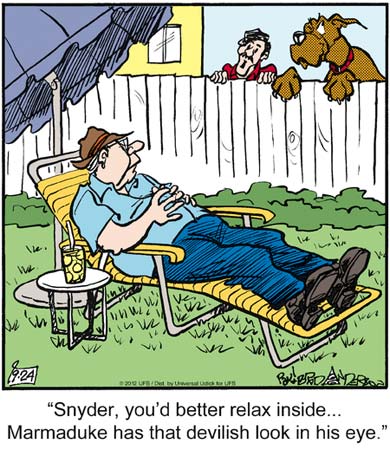 I have to admit, I’ve been reading Marmaduke for years and never knew that the next-door neighbor guy’s name was “Snyder.” Do you think that’s always been the case or that the cartoonist finally decided to give him a distinct identity within the strip? Oh, also, the dark light of a thousand demons is about to start radiating out of Marmaduke’s skull, so all humans need to cower indoors if they want to survive.