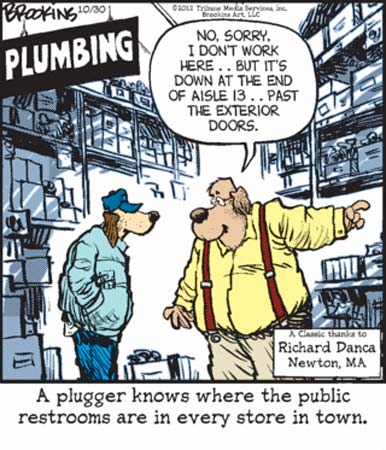 You know, before I read the caption, I thought I had this one figured out — “pluggers are friendly and helpful, and also spend so much time at their local home improvement big box store that they know where everything is,” or something along those lines. So you can imagine that I was surprised and delighted to discover that it was actually about how pluggers are just stone cold constantly doing their business in public restrooms to the extent that they have elaborate mental maps of where they can go do it. Do pluggers have lower GI or urinary continence problems that cause them to routinely be on the prowl for a publicly accessible toilet? Are their home bathrooms so gross that they actually prefer to go in a facility that they can be reasonably sure is mopped once a day? Or do they get a sick transgressive thrill out of it? Whatever the case, this is sadly one of the most interesting plugger quirks showcased to date.

Oh, hey, Rex Morgan sex worker update: the fun gals at Junior’s apartment building are strippers, not prostitutes. Strippers with hearts of gold, though, tending to and raising money for one of their number who (we learned yesterday) is suffering from breast cancer. Actually presenting a breast cancer storyline seems like a much more natural and organic way for the comics to acknowledge Breast Cancer Awareness Month than, say, just putting pink on everything, though it says a lot about the pacing of soap opera strips that this only became clear on October 29th. Will Rex do an emergency breast-cancer-ectomy, being a scowling dick about the whole thing all the while?