So Rex Morgan saved a lady’s life with CPR and has, in his inimitable way, been a sullen dick about it ever since. Everyone’s been thanking him and telling him that he’s on YouTube and the world thinks he’s a hero and he’s just gotten madder and madder about it. I sincerely hope he uses this impromptu press conference as an opportunity to just tell everyone in the world how dumb they are and how much he hates them. “Yes, if administered correctly, CPR absolutely saves lives! Too bad most of you incompetent yahoos won’t do it correctly, leaving a trail of corpses with shattered sternums behind you. Here, here’s my long list of everything that’s wrong with everyone who’s not me!”

Whoa, did B.C. just make a radical statement on the day after the election, announcing that our democracy is nothing but a sham and that the military-industrial complex is the true winner no matter how we vote? I mean, probably not, but the alternative explanation is gibbering madness, so let’s say yes. 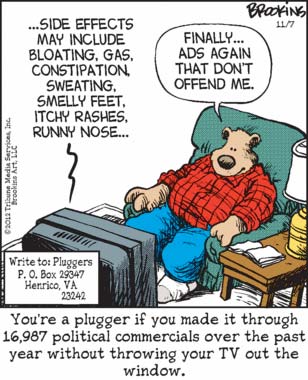 Pluggers, meanwhile, are glad that pesky election stuff is over so they can concentrate on what’s really important to them: their disgusting bodily functions, and pills that might make them even more disgusting.