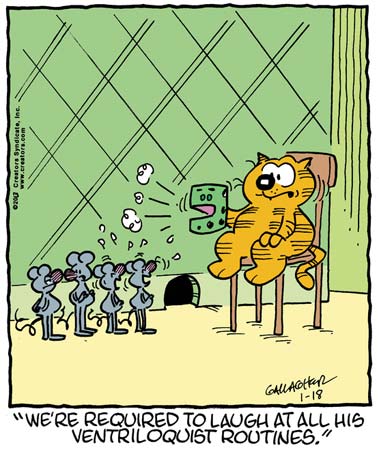 I am seriously puzzled about just what exactly Heathcliff’s puppet-thing is supposed to be. The holes (or are they just black dots?) and the general shape and the proximity to mice remind me of a stereotypical wedge of cartoon Swiss cheese that the colorists have misjudged into greenness. But perhaps not? Maybe it’s some sort of weird makeshift sponge-puppet? I’m a little resentful about the ambiguity, because it’s distracting me from the delightful main point of the strip, which is that Heathcliff rules the local mice as a brutal dictator, demanding not just that they obey him in deed, but that they love him, deep in their souls. Heathcliff’s second-rate ventriloquist antics are in fact an elaborate test of loyalty. The two unhappy mice in the back of the queue here will soon be reported by informers to his brutal Happiness Police.

Judge Parker’s seems to be on the verge of a new plot that will test the philosophical boundaries of its own fictional universe. Specifically, it will answer the question we’ve all wondered about: is there a sum of money so large that it can, when spent, actually have a noticeable effect on the balance sheet of the Spencer-Driver clan? Keep in mind that Neddy, Sam and Abbey’s daughter, is a college student, and yet today’s strip reveals that she has her own private banker. One assumes that, in order for this to even get on her parents’ radar, these “large withdrawals” involved a fleet of armored trucks guarded by elite French special forces troops.

Wow, it turns out I my interpretation of Lake Freedom’s significance was all wrong! Because it turns out that underneath Lake Freedom there’s an internment camp. That’s symbolism, guys, symbolism about America, really makes you think, hmm?