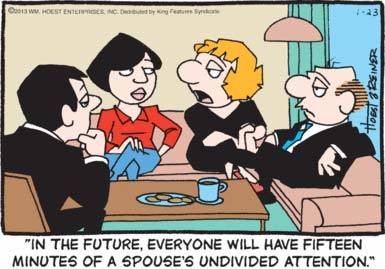 I don’t like to tell a cartoonist how to do their job … haha, who am I kidding, that’s literally been exactly my schtick on this blog for the past eight and a half years! Anyway, I’m all for just having Loretta telling people about how unhappy her marriage is, right in front of her husband, but maybe this panel would be a little funnier if Leroy were more obviously not paying attention to her? Like, maybe if he were looking at his phone or something. I mean, I guess you could interpret his expression as a thousand-mile stare, a sort of numb mask that settles on his face every time he thinks about how he’d rather be anywhere other than with his wife and do anything other than listen to her, but he pretty much always looks like that so I don’t think it quite drives the joke home the way it should.

The first panel of this strip is by far the happiest I’ve ever seen the Hobbs family when they’re voluntarily spending time together. I do have to wonder how exactly Francis “plays” Wheel of Fortune and ruins the experience for everyone else. Does he shout out painfully wrong answers, disturbing his siblings’ and mother’s silent, maniacal grinning? Whatever the case, perhaps he can go commiserate about his banishment with his brother’s wife, who has also apparently been uninvited from Family Game Show Watching Night.

“I win because I use the lure that is named after me — the ‘Rod Bassy Killer’! I’m called that because I killed the real Rod Bassy and assumed his identity after selling my soul to the Devil so that he would make me the greatest fisherman alive. Wait, did I say that last part out loud?”

Just for the record, since Friday Newspaper Spider-Man has dedicated a single panel to depicting Kraven’s daring escape and 11 panels to depicting these morons standing around talking to each other.

I was going to object that a witch, of all people, shouldn’t need to consult a fortune teller for a glimpse into the future, but then I remembered that I’m already on the record as doubting witchy powers, so well played, newspaper comics industry.