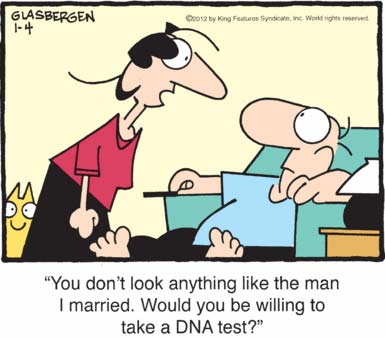 Here’s a fun fact, if by “fun” you mean “soul-shattering”: there is a rare condition called the Capgras delusion, in which the sufferer suddenly becomes convinced that a loved one — often a spouse or parent — has been replaced by an impostor. I’ve always been irrationally fearful of developing this myself, and have wondered if just knowing that the condition exists is enough to keep it at bay or at least understand what’s happening if it occurs, or if the delusion is so powerful that all rational thoughts flee your mind and your life becomes an unending paranoid horror. Anyway, Harriet seems to have been seized with this terrible mental illness and is demanding desperate measures to try to hold onto some tiny shred of reality, or maybe she’s just being extremely sarcastic how Stanley has become such an unattractive loser.

Oops, I forgot to catch up on Christmas-week developments in Dick Tracy’s “costumed vigilante” plot, but I guess I don’t need to now because today’s strip provides a wall of text that gets us all pretty much up to date. Thanks, wall of text! I’m more concerned about that shadow lurking behind Dick, though, which may presage how he’ll adapt to the costumed chaos in his fair city. Has the new Dick Tracy creative team spent month meticulously recreating the classic vibe of the original strip, just so that they can abruptly turn it into a Batman comic when their editors stop paying attention to them?

Yup, those cake pics you’re looking at sure reflect the beauty of nature, Mr. Dill! With their … pink and white frosting … and garlands … and such. Yeah. Nature cakes. Hoo boy. This guy’s screwed. You’ve shackled yourself to a loser, Mary, do you hear me? A loser!

I was going to complain that this year’s Curtis Kwanzaa tale wasn’t insane enough, but that was before an adorable tiny primate stone cold stabbed a lady in the neck.