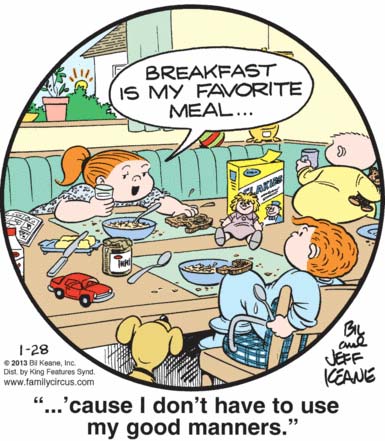 Ma and Pa Keane — and, for that matter, Billy — are suspiciously absent in this filthy, ill-mannered breakfast scene, in which Jeffy is balancing his toast on his knee, Dolly is emitting some kind of fluid from her left arm, and PJ is just stone cold rubbing his ass on the table. Where are the elders? Have they and their tyranny finally been overthrown bloodily by the younger half of the Keane Kompound’s population? Is the “morning” on which this breakfast is being eaten actually a metaphorical new dawn of freedom, and it’s really 5:30 p.m., because now nobody can stop Dolly, Jeffy, and PJ from eating whatever they want whenever they want?

Oh, Herb and Jamaal, you’ve had more than eight years to think about what you’ve done wrong, and still haven’t figured it out. 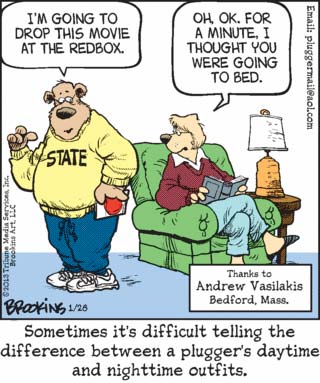 You know, I live only a few blocks form one of the U.S.’s most competitive universities and see smart, upscale young students going to the store or to restaurants in their pajamas pretty much daily, so this isn’t just a plugger thing. It is true that pluggers are incapable of figuring out how to set up Netflix, though.