Luann used to be one of those strips whose archives I would read when I got back from vacation, because maybe I had missed exciting developments! But slowly I realized that, enh, Luann, and I stopped doing it. So I have literally no idea how concerned the DeGroots should actually be about their teenage daughter spending so much time online, but I do find it pretty amusing how vague they’re being about it. As if they’re not really sure what this whole “online” thing is about — they’ve heard about computers, obviously, but wouldn’t actually use one, because they’re for young people — and so can only go by what they read about in articles when it comes to imagining what their daughter might be doing in so-called “cyberspace.” What did this article, which presumably ran in a print publication, say? Did it reveal that sometimes people on the Internet take on personas different from their real-life lives? Was Mr. DeGroot shocked to learn that, with some cunning “search engine” work, a cyber-naut can find images and videos of people in various states of undress, or even engaged in sexual acts? We can’t know. He doesn’t dare speak it aloud, even to his wife. It’s too awful.

Once upon a time, Margo’s dad was a wealthy two-timing cad who knocked up the family’s ethnic-of-some-sort maid and forced her to give up the baby (our Margo!) to his wife to raise, but then years later Margo found out about everything and then later still her bio-parents started hanging out together and then his wife became a pill-crazed maniac. I bring this all up because, even if Margo’s parents have suddenly been retconned into bland, kindly old WASPs, we can at least take solace in the fact that her dad is still rich! Rich enough to pay for luxury suites for Margo’s friends, anyway. (Hope you’re enjoying your stay at a single-room occupancy hotel paid for by Red Cross vouchers, everyone else in the building!) Anyway, it’s nice to see that this “luxury suite” has the same fussy 1950s interior design as the girls’ apartment, since we wouldn’t want them feeling aesthetically unmoored during this trying time.

The few seconds a day it takes to read Newspaper Spider-Man is literally the longest I’ve ever spent with Daredevil as a character, so I was somewhat chagrined to learn upon doing a bit of research this morning that his “radar sense” is indeed a thing, though more recent interpretations just sort of have it as a super-intense version of the whole “blind people’s other senses are heightened” thing and thus not something that can be detected by, say, a missile. Spider-Man’s “spider-aura”, in contrast, seems not to be a thing, since three of the first four Google hits for the phrase are to a non-Spider-Man themed discussion from 2011 on an Ultimate Fighting Championship message board. I guess they’re talking about his spider-sense and just didn’t want to say “sense” twice in the same panel? Haha, Spider-Man is forced to resort to clumsy circumlocutions in his own comic strip! Anyway, this strip is notable because it features two superheroes deciding to go with the classic “let’s split up and hope it goes after you” technique.

“Birseed” in the final panel is almost certainly a typo, but if you want a realistic in-universe explanation for it, you can go ahead and imagine that Gil is just kind of drunk. 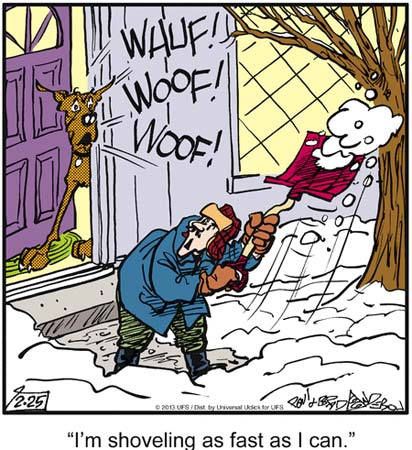 Haha, it’s funny because Marmaduke’s owner is terrified of Marmaduke and is laboring mightily to obey his woofed commands! SHOVEL, PUNY HUMAN, SHOVEL OR THE SNOW WILL BE STAINED RED BY YOUR SCATTERED VISCERA