Oh hey look, the actor playing James Bond, one of the highest-profile roles in modern movies, is sleeping/“experiencing love” with his publicist, which probably isn’t a violation of any kind of ethical standards, at all! Anyway, if were you wondering what exactly the deal was with Evan and his weird cruel aunt who ran the rival agency he was secretly working for, too bad! It’s all about Margo lying to her new boyfriend about her dead fiance for no good reason now.

Most ancillary Beetle Bailey characters are created to mock/cash in on/acknowledge the existence of some pop cultural phenomenon that’s already several years old by the time they’re introduced. Rocky was originally meant to symbolize the rock and roll music the kids like so much today, but has since become a sort of general agent of subversiveness. Today’s strip acknowledges that rock music and modern art have a lot in common, in that they’re both plots by angry hipsters to make squares feel stupid. 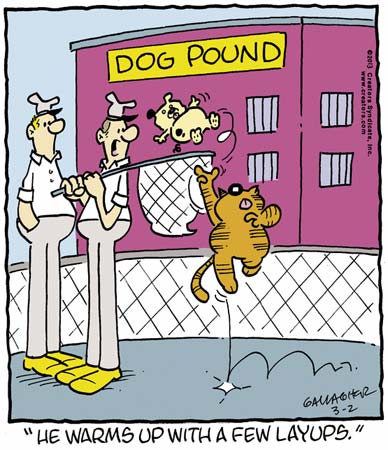 Ha ha, Heathcliff likes to warm up with a few layups, using a dog that’s all stiff and has … blank, lifeless eyes, and … OH MY GOD HEATHCLIFF IS PLAYING BASKETBALL WITH A PUPPY CORPSE