“Hello, everybody, we’re the creative team behind Rex Morgan, M.D.! We know that you enjoy exciting tales of adventure and the medical profession, and that you also like hot bodies in various stages of undress. We made you a promise — that the attractive characters in our feature would occasionally strip down to their underwear — and we aim to keep that promise. Every five years or so counts as ‘occasionally,’ right? We’re working our way up to full frontal nudity, which should get the syndicate OK sometime’s in the mid 2200s.” 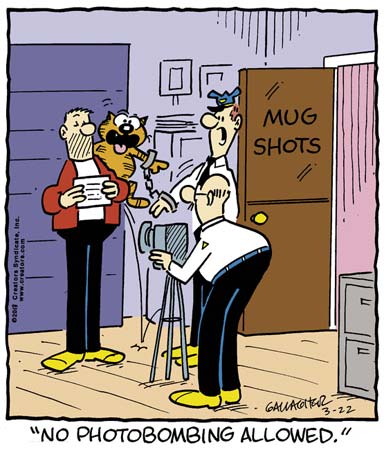 I wouldn’t worry too much about photobombing, officer; Heathcliff will not be visible at all in this picture, seeing as the camera is pointed directly at the suspect’s crotch. This is a very particular kind of mug shot for a very specific audience.

“In the meantime, let’s enjoy a big, hearty bowl of orange mush in Rusty’s honor. Mush was all we ever allowed Rusty to eat, and orange was his favorite mush color. He would’ve wanted it this way! Er, does want it this way, I should say, he’s probably still alive. At least we’re all hoping that he is! Yeah, that’s it, hoping.”

“Or to late March, which is when this comic strip will be published!”