If I were a better person/student of the great history of the comics medium, I suppose I’d be more interested in the Slim and Walt go to the Comics Retirement Home storyline? As it is, I can only work up the energy to care about it when something truly unusual happens, like when a dapper, nightmarish pig-man wanders into the foreground of the panel, giving you a sly look that you’ll see every night for the next three to eight weeks as you desperately try to fall asleep. 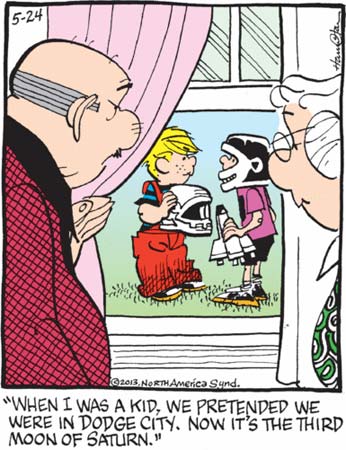 “When I was a kid, we pretended we lived in violent, lawless frontier towns, where the only respite from attempting to murder each other over cattle or women came when we had to battle the last desperate remnants of the region’s indigenous population, who we were working to displace or exterminate. Now all kids care about is exploring fantastic new worlds and adding to our culture’s scientific knowledge and whatnot. It’s fucking bullshit.”

It sure is ironic that looking to buy for something to rest on can itself be tiring, amiright? In related news, don’t ever lie down on sample beds in furniture stores, the people shopping for beds are drenched in sweat, gross gross gross

“Uh-oh, I’d better make sure 9-1-1 is on speed dial, because it looks like Herb is finally going to put his money where his mouth is on that whole chainsaw murder spree thing he’s been talking about for months!”