Sometimes when I take a little break from blogging, I wonder if the comics landscape will have shifted in my absence, leaving me stranded in a world I no longer understand. Fortunately, the newspaper comics industry is incredibly ossified, so I usually have no worries on that score. For instance, Spider-Man is engaged in a battle against a super-villain, and is losing, pathetically, and in need of a bailout from another, better superhero! No changes here! Kingpin is at least being innovative in his attack on Spider-Man: he’s using a laser beam hidden in his cane to defeat the wall-crawler, rather than just bludgeoning him with the cane itself, which would surely have been just as effective and probably a lot more efficient, if less artful.

Lu Ann clearly did not take the opportunity afforded by my absence to become less of a moron. At first I was confused as to why she would be surprised that Greg, Margo’s client/love slave, was James Bond — surely this isn’t a secret to anyone at this point? But then I saw how she apparently shouldered Margo aside and grabbed hold of her freakishly huge laptop, so now I assume she thinks Greg is trapped inside the screen. “Whoa — is that Greg?! Greg, don’t worry, we’ll get Superman to free you from the Phantom Zone!” 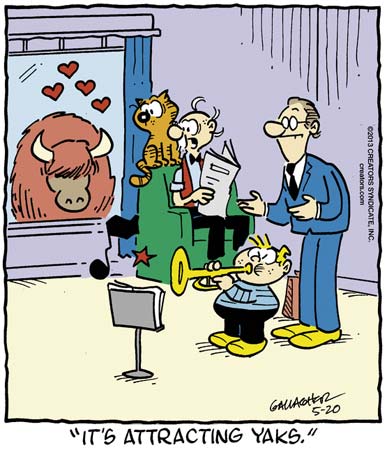 It there’s one thing we can expect from our longrunning legacy comics, it’s that they do a good job of illustrating hoary old humor tropes. Haha, Heathcliff’s owner-boy’s trumpet (?) playing is terrible, resembling a bellow made by a yak! Specifically, a mating bellow made by a yak. Check out the hearts hovering above that yak’s head. It’s attracting yaks … for sex.

Like many isolated, desperately poor, undergoverned enclaves, Hootin’ Holler can erupt in vicious, arbitrary violence at any moment.