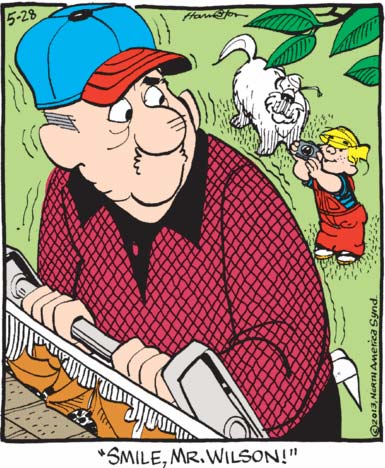 There’s the old Menace we know and love! At least, I assume something menacing is happening in this panel, as Mr. Wilson looks completely terrified. Not sure what that has to do with Dennis taking a photo of him, though. Unless maybe he’s a nefarious criminal, possibly wanted at the Hague for crimes against humanity, and he’s afraid that if his face appears anywhere online INTERPOL will come for him. Or maybe it’s actually the act of climbing the ladder that freaks him out, and his anxiety is compounded by the thought that Dennis is photographing him in an embarrassing situation? Either way I wouldn’t worry too much about it, Mr. Wilson: that’s not a phone or anything that can connect to the Internet, just some dumb old-fashioned standalone non-electronic camera. They probably don’t even make film for it anymore! 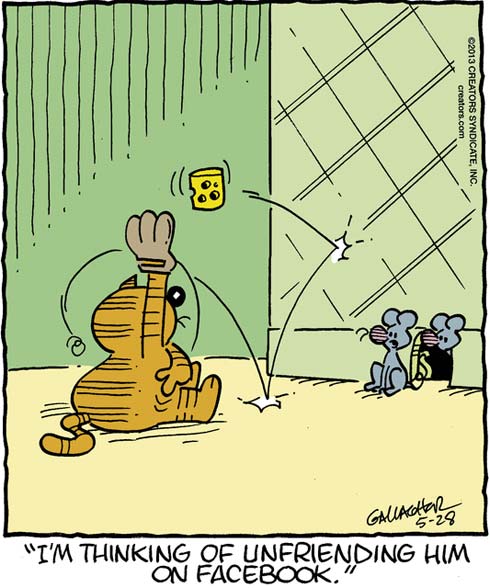 Man, I do not even get the deal with the Heathcliff mouse strips and cheese. It’s like, Heathcliff does weird, inscrutable things with cheese when he’s in the general proximity of mice? Because mice like eating cheese? It my experience cats really enjoy eating some delicious cheese as well, but that’s neither here nor there. Mostly what I want to say about this cartoon is that “I’m thinking of unfriending him on Facebook” should replace “Christ, what an asshole” as the default catch-all punchline for New Yorker cartoons and indeed every comic ever. 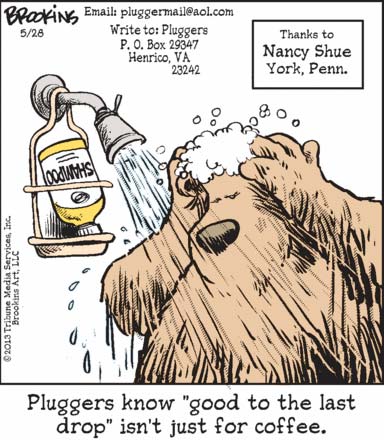 Today’s shower scene is clearly the sexiest Pluggers to date, though the eroticism is somewhat reduced by the revelation that stingy pluggers only use shampoo on the small portion of their fur that happens to be on top of their heads.