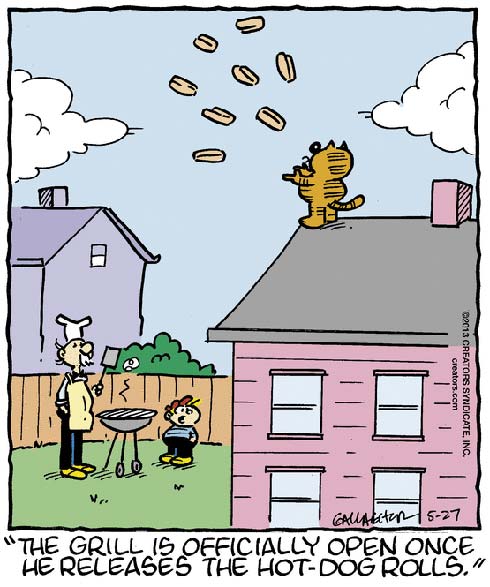 The best thing about this Heathcliff is that it almost isn’t creepy. Like, we could just take it at what I’m pretty sure is meant to be face value: that Heathcliff celebrates the beginning of hot grilling seasons by getting up on the roof and throwing a bunch of hot dog buns into the air. (Side note: Do some people say “hot dog buns” and others “hot dog rolls”? Is it a regional thing? Am I weird for thinking “rolls” sounds off?) That would be … well, weird, but not unsettling. But in fact it doesn’t look like Heathcliff has thrown them at all. His arms are barely extended, certainly not enough to explain how far up the hot dog buns are. No, it looks like he really did release them, and they’re flying. They’re alive. The bread flapping like wings. Rustling. Raining crumbs down below. They’re free. They’re free. They’re free. Heathcliff stands, arms extended. The hot dog buns swoop and dive and trill their little song to each other. Grilling season …. has begun.

I’m not even going to get into the extremely dubious physics behind the solution to today’s puzzle because I can’t stop thinking about who drove that car into the water. Because somebody’s dead, right? That playful octopus pushed aside the bloated corpse of Harry Ape or Buford Bull or some other nefarious land-beast, or maybe the octopus is on top of the drowned evil-doer, just draping his tentacles all over the poor guy’s stiffened limbs. And let’s not even talk about the fact that Slylock knew all about this, used his ratiocination to get to the beach before the robber even did, probably watched the car go into the water, watched it sink under. “Let’s take a leisurely walk up the road and get some scuba equipment, Max,” he said. “Things ought to be nice and safe for us down there in about, say, an hour.”