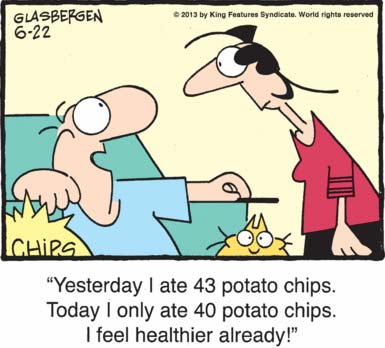 There’s something about Stanley and Harriet’s affectless naivety that just kind of breaks my heart. Like, if Leroy Lockhorn said this, it would be an extremely sarcastic response to a failed attempt by Loretta to get him to eat better, and would also have nothing to do with the actual amount of potato chips he ate. Whereas I picture Stanley imagining that Harriet will find this hilarious, and also carefully counting all the potato chips he ate over a two-day period in order to make sure the joke was also accurate.

Sorry everybody if I got you super excited Monday about Crankshaft gracing us with some New York-themed puns. It turns out we had to sit through a whole week of Crankshaft being an asshole to everyone who works at the airport first. Look, in panel three we can see two people hating him at once!

Haha, thanks, Tom, I will very much be seeing that grossly exaggerated wink in my nightmares tonight! Still, worse will come when I awake, because then I’ll be unable to stop trying to figure out the precise combination of sexual acts “I was in the mood for meat … but seafood sounds really great, too!” is a metaphor for.