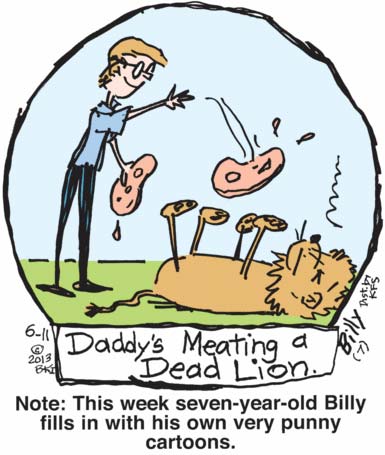 Hey, everyone, grown-up Keane Kid Jeff Keane is once again pretending to be his older brother Glen’s in-panel avatar Billy filling in for his deceased father, who we’re pretending is still in charge of drawing the strip. Got it? Anyway, this hall-of-mirrors meta-version of Billy is gracing us with illustrated puns this week, and it’s only Tuesday and we’ve already reached ULTIMATE NIGHTMARE LEVEL. Ha ha, look, it’s a majestic lion, king of beasts, lying dead, the vague odor of rot already beginning to waft up from him. A horrifyingly cheerful Big Daddy Keane stands only inches away and pelts the corpse with bloody chunks of meat. I mean, I guess if you’ve already decided that “meat” as a transitive verb means “hurl raw steak at,” why not go all the way into horror, you know? 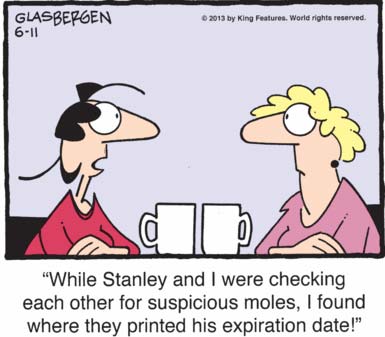 Speaking of rotting meat, it sounds like Stanley’s past his due date, and will be dead soon! Maybe he’s already putrefying from within? I was going to say that there has to be a sexier set-up for noticing something on your spouse’s naked body than “checking each other for suspicious moles,” but considering Harriet’s husband is a walking semi-corpse, who can blame her here. 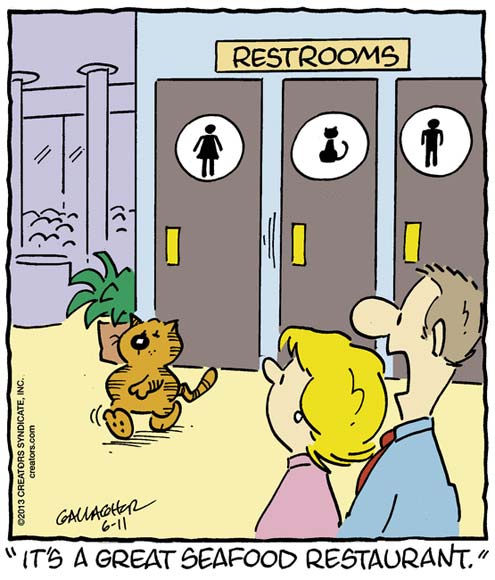 I guess I would judge a seafood restaurant’s quality not only by the number of cats it attracts, but also by its ability and determination to keep said cats out of the dining areas? Anyway, behind that middle door there’s just a room full of sand and cat shit, FYI.