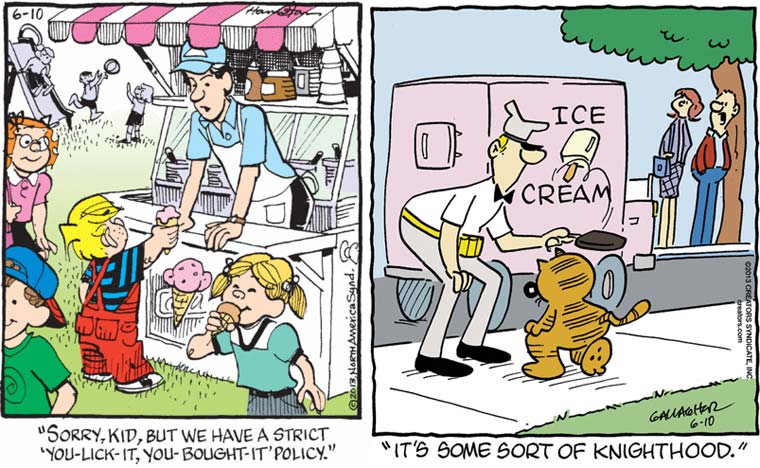 Since my main beef with Dennis the Menace is that he long ago ceased to be menacing, I feel obliged to acknowledge the flashes of menace we do see. Just trying to return some ice cream that you’ve already gotten your gross spit all over is less “menacing” than “kind of a dick move,” but I choose to believe that Dennis took the ice cream cone from this guy, gave it several long, languorous licks over a period about 45 seconds, all while maintaining unbroken eye contact, then thrust it back at him, saying “I don’t like this, give me money back.”

Heathcliff, meanwhile, is generally well known for a just-don’t-give-a-shit attitude of the sort that Dennis aspires to. However, here we see that he’s willing to kiss a little ass if that’s what it takes to get what he wants, which frankly saddens me.

This strip has spent decades making jokes at the expense of rural Americans, but today’s strip, which implies that country folk are interbreeding with evolutionary throwbacks and other nonhuman hominids, goes too far.

This scene of newspapermen (or newspaperman-birds, I guess) blaming each other for the decline of their industry by spinning a nautical metaphor further and further out of usefulness is, I’m pretty sure, a fairly spot-on depiction of the modern media landscape.

“You’re kidding, right?! I’m not going to let you wear a white dress in front of a photographers. Lu Ann, you spill things a lot.’