So, here you go: Shoe finally takes a stab at acknowledging that its denizens are sentient bird-men and -women, with puzzling results. First of all, I can’t believe I never made the flappers-bird connection before, and am reasonably sure that there’s some elaborate sentient-bird-women-as-flappers fan drawings out there, possibly on DeviantArt, possibly in the context of an all-sentient-bird Great Gatsby graphic novel. And yet the whole potential crossover is wasted, for the most part. Instead, Loon just tells a weird story about how his aunt used her unremarkable-in-this-context power of flight to … transcend to a higher plane of existence? Like in Jonathan Livingston Seagull? Or maybe she just died of exhaustion/oxygen deprivation? Anyway, if there were ever a situation where Shoe’s patented goggle eyes of horror would be appropriate, it’s this one — “let me tell you a fun story about my aunt that ends in her disappearance and probable death” — but instead the Perfesser just stares straight ahead with dead-eyed numbness. He stopped listening to Loon hours ago. He just says “Yeah?” during conversational lulls to feign politeness.

It may be no Gail Martin mystery, but this summer’s Gil Thorp storyline has been zany in a low-key way, involving an amiable, Alzheimer’s-stricken ex-pro-wrestler and his also ex-pro-wrestler son wandering the nation on the dad’s whims. Today, our senile king of the squared circle is going to teach One-Armed Steve some wrestling moves! Steve seems amused and convinced this will all be in fun, about which he may turn out to be mistaken. 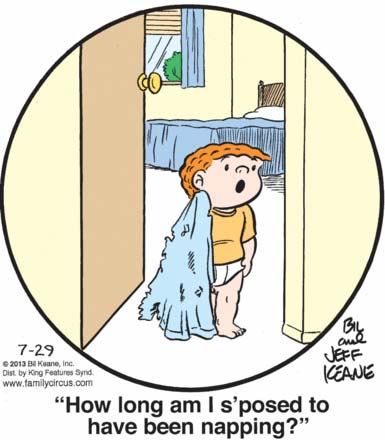 I guess the tattered state of Jeffy’s blanket is meant to indicate that it’s a well-loved security object for him, but I prefer a different interpretation: it’s decayed during his multi-decade, Rip van Winkle-style nap. No, I’m not sure why Jeffy hasn’t gotten older or why his clothes and house are still intact, even though his family long since moved away and/or died. The important thing is that Jeffy has been thrust alone into a world he no longer understands, OK? Just … just give me this.