Boy, Slylock is sure getting all Judgment of Solomon down at the trailer park today! You don’t even need to read the solution (it involves trying to assess the cream soda’s fizziness levels) to see the contempt he holds everyone in here. After all, whether the delicious soda rightfully belongs to Reeky or to Mrs. Beaver, Slylock is going to pop it open and ruin anyone’s chance of enjoying it on their terms. Presumably he’ll just roughly thrust it at whoever’s it turns out to be, saying “Drink it quick if you don’t want it to go flat.” Or maybe he’ll just gulp the whole thing down himself, as repayment for having to come down and sort this nonsense out in the first place. 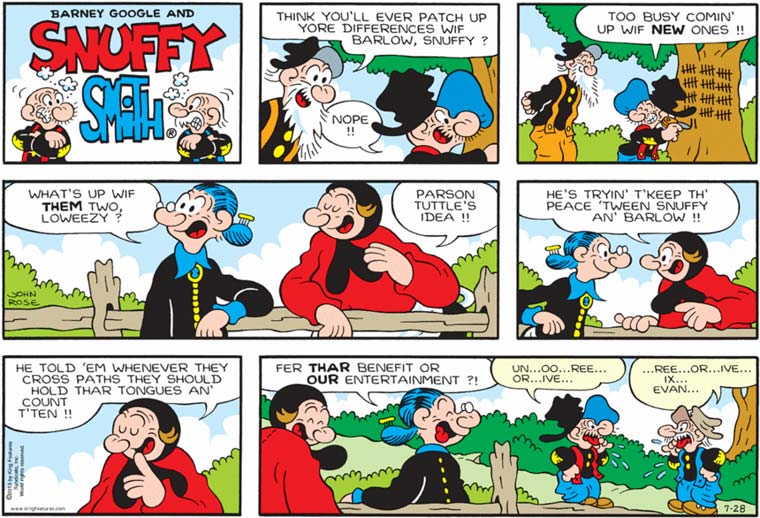 If there’s one aspect of life in Hootin’ Holler that I don’t think gets enough treatment, it’s the system of clan-based feuds that inevitably springs up in places where the nation-state’s justice system is weak, nonexistent, or distrusted. What deadly slights do those marks on the tree represent? How many generations of Smifs have been recording them against how many generations of Barlows? Is there any way to wipe the slate clean, except with Barlow blood?

For a while now the Marvin Sunday panel has consisted of Marvin’s entire family staring straight ahead in numb, wide-eyed despair, which as you can imagine has pleased me to no end. Today, however, Grandpa offers a specific complaint, which I like less, as I prefer to think of them having reached this state merely by contemplation of their own hellish existence.