Guys, our sinister fake big game hunters have finally noticed that famous nature writer Mark Trail has literally gone “undercover” at their fake hunting lodge without wearing a disguise or even using a fake name. I guess they finally got that free trial issue of of Woods and Wildlife Magazine they signed up for, which they planned to leave lying around their fake hunting lodge to make it look more like a real hunting lodge? I like that Mark’s picture is prominently displayed at the top of the page; I assume this means that his editor Bill Ellis has given him a monthly column, where he offers his wooden, awkward thoughts on issues of importance to the outdoorsmanship community. Or maybe this is actually a copy of Outdoors Reporter, a trade magazine for nature journalists, and this a wooden, awkward interview with Mark instead. 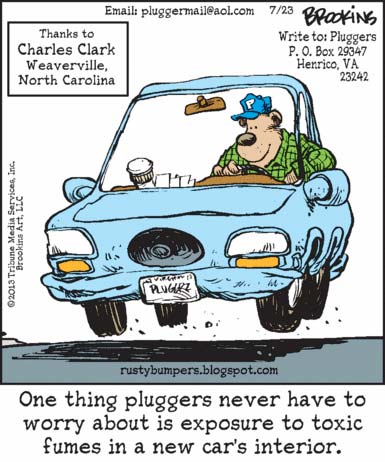 I’m going to mostly ignore the fairly baffling joke in today’s Pluggers (“ha ha, all you ELITIST LIBERALS are going to get LUNG CANCER from the SCIENCE CHEMICALS in your FANCY CARS, your so-called GREEN HYBRID is less ECO-FRIENDLY than you think”) and instead point out this plugger’s license plate appears to read “PLUGGRZ”. Which is problematic, because the s-for-z orthography is well known to derive from the rap music, which is anathema to pluggerdom. Perhaps it actually reads “PLUGGR2”? Just imagine our poor bear-man at the DMV, all excited as he waits in line by the idea of getting a plugger-themed license plate, then sighing heavily when he finds out that someone has beaten him to the punch and trying to decide if it’s still worth it or if he should just give up on it all together. I’m just a plugger, he thinks to himself. I guess I don’t deserve any little joys in this life, because I’m not quick enough. Then he goes back to his car and breathes in the plugger equivalent of those toxic fumes from a non-plugger’s new car interior. (The plugger equivalent is plugger farts.)