Wow, I thought Jughead was a compulsive eater because he needed to fill the hole inside him where emotional intimacy should be, but apparently there’s this whole other twisted sadism angle to it too! Notice that Jughead isn’t just condemning this delicious burrito to a gory execution in his mouth, but rather to indefinite detention and torture in his digestive tract, casting himself in the role of some kind of mobile Sarlacc Pit. Does he chuckle to himself, imagining the poor burrito slowly being dissolved in his stomach, screaming in agony and begging for a quicker death? The long string of saliva dribbling from his mouth in panel two adds to the horror. Archie and Betty are right to leave him alone during this disturbing episode. 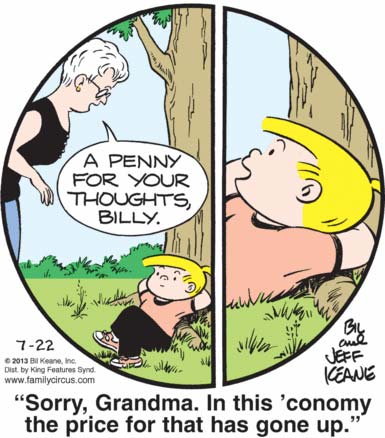 I think the thing that bothers me most about Billy’s latest smug-bomb is not that he believes his thoughts are actually valuable, but that he’s dropped the first syllable from “economy,” like he thinks that’s cute or something. “Sorry, grandma, but in this ’conomy we don’t have time to pronounce ‘economy.’ There are valid reasons for this, but if you want to find out what they are, you’re gonna have to pay me.”

Hey, Mary, I don’t want to tell you how to live your life or anything, but when you’re saying “I remember when I became a widow … it seems like it was only yesterday,” probably you shouldn’t be rubbing your hands together gleefully.