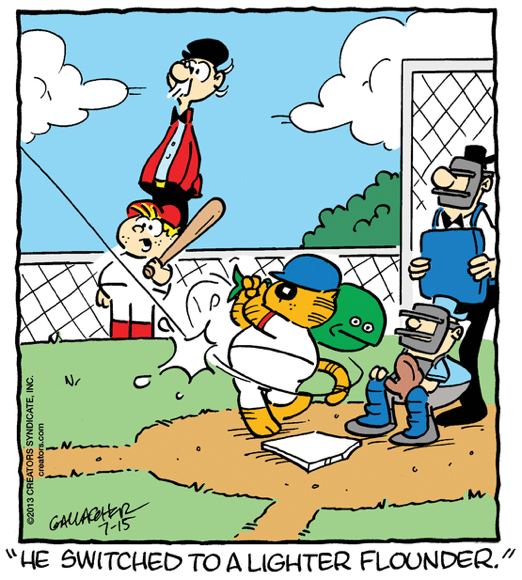 Last week’s Heathcliff fish joke, while well within the expected whimsy-parameters of an inoffensive long-running legacy comic, still adhered to a basic logic, that logic being “cats like stealing fish, to eat.” Today’s panel provides something more in line with the profound weirdness bubbling below the surface of this feature’s modern iteration. Cats like fish, and I suppose cats like “playing with their food,” when their food is alive, but instead here the tenuous conceptual cat-fish connection produced a scenario where Heathcliff has a collection of fish of varying densities that he uses as athletic equipment. How dead are these fish, anyway? Are they still floppy? Do they hit the ball with a meaty smack, or have they started to rot, with contact with any projectile producing a cloud of scattered fish-flesh? Or … maybe, as I imagined last week, we’re meant to interpret the fish’s open eyes as meaning that it is still alive, which makes its bemused facial expression all the more hilarious. “Oh, now the cat’s using me as a baseball bat. That’s fantastic, just fantaaaastic.”

The current run of Newspaper Archie Reruns From The Late ’90s Or Maybe The Early ’00s has actually involved a continuing plot that’s running over multiple weeks, which is kind of a new one, though not new in the sense of these strips actually being new, obviously. Anyway, Ronnie’s cruel father made her get a job! Obviously this job just became another venue for her long-running battle with Betty over Archie’s dubious charms. Which I guess is bumming him out? Look at how miserable Archie looks in panel two! I’ve never seen him sadder! And this is before he finds out that Veronica is stalking him with potentially malicious intent. Maybe he’s just sad that she gets access to all that delicious ice cream and he doesn’t?

As we already know, Camp Swampy exists in an pocket universe in which a single, awful day keeps on happening, forever. Dimly aware of the nightmarish nature of his reality, Beetle is attempting, through this conceptual artwork, to convey the horror of his damned existence.