Good news, guys! Spider-Man’s ill-thought-out scheme to avoid having to make up some semi-believable explanation to a bored TSA agent about why he has a Spider-Man costume in luggage by wearing his Spider-Man costume and then making a dick of himself by climbing all over the walls has succeeded! Not because of any real heroics, or because he had a plan of any sort in place, obviously, but because somebody in the layer of Homeland Security bureaucracy that a TSA agent can reach via walky-talky told said TSA agent to “make this stop happening in such a way that I don’t have to ever hear about it again.” Still, Spidey is right to celebrate! Any conflict that doesn’t end with him accidentally knocking himself unconscious is a triumph! 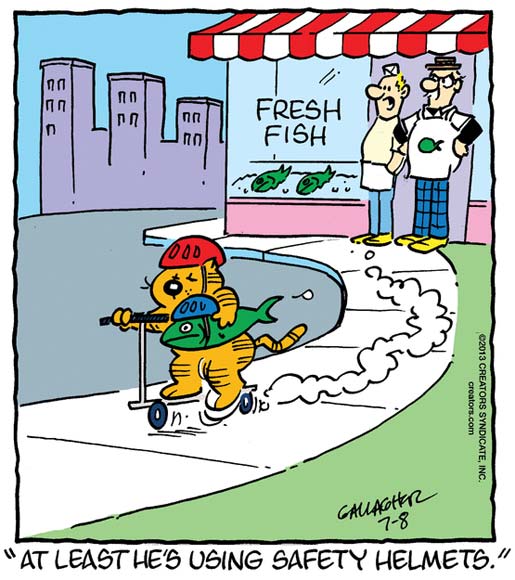 OK, so I know fish don’t have eyelids and so their eyes appear to be staring at you in unblinking horror long after they’re dead, and that Heathcliff has stolen this dead fish and put a helmet it on it for joke/whimsy purposes as he razor-scooters off. But still, I choose to interpret the scene thusly: that fish is still alive, and is aware that he’s being carted for eating. His expression indicates not so much horror as a bemused resignation. “Oh, so I’m on a razor scooter now, with a cat. Greeeeaat.”

“I sure am enjoying this copy of Person magazine! It’s a great resource for finding out what sort of behavior patterns persons find normal. Plus, it’s a magazine that only persons read! Says so right in the name! Why, it certainly wouldn’t be purchased and read ostentatiously by some sort of space-lizard wearing a human meatsuit disguise! Ha ha!”

Oh, I’m sorry, I didn’t realize that the Six Chix were competing amongst themselves to see who could create a cartoon with the most horribly mangled corpse in it. Explains a lot!