Wow, I’ve been reading Herb and Jamaal for something like ten years now and I’m pretty sure I’ve never seen Herb make any comments about his wife’s inability to cook. But whatever, it’s an infinitely relatable joke (as are jokes about hot airline meals, which haven’t been served on domestic coach flights since 2005 or so) so why not just drop it in here? Haha, women, am I right? They can’t cook, even though they’re the ones who are supposed to cook! Herb and his live-in mother-in-law run a restaurant together and presumably have some degree of culinary skill, so it totally makes sense that Herb has been seething with resentment over the dinners his wife makes them for years now. 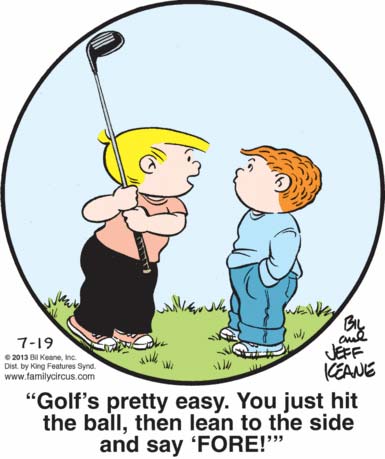 I genuinely, non-ironically love the dubious way Jeffy is regarding the business end of that golf club. He knows that thing’s coming for him, coming for his big, tempting, oversized target of a head. He doesn’t know if it’ll happen now or a week from now, doesn’t know if it’ll be on purpose or just because Billy likes swinging things around and doesn’t really care who or what he hits, but he knows trouble’s brewing.

“You can let even one of your dearest friends believe that you’ve ever spent a single solitary second caring about whether he lives or dies! He’ll think you’re ‘funny.'”