Prehistoric or not, it’s time to catch up when Prince Valiant beats you to a technology joke by two years.

“And by ‘great practice’ we mean ‘pointless and expensive truck rolls that put us at risk, endanger the public safety, and have had no effect on the frequency or recklessness of your life-threatening behavior.'”

“As part of your award, your family and the Montgomery County Court have arranged a special honorary bunk for you at, um, ‘Firehouse Manor’, where you’ll be on special honorary permanent assignment under the “Honorary Heroes” program, Ohio Revised Code (ORC) 5122.01(B). Your new Captain will give you additional orders on your arrival. Be sure to take all the vitamins she gives you so you can perform all your special honorary duties! Been great knowing you, gramps!”

Dick Tracy‘s new creative team has been referencing, recapping, and extending old characters and plots all the way from the strip’s 1930’s origins through the Moon Madness of the 1970’s. Today’s second panel recaps the final episode before the team took over from Dick Locher in 2011: in it, Mordred tries to kill Dick Tracy in an abandoned granary but is eaten alive by rats before he can seal the deal.

So what happens now? Does the strip move forward from the present moment, with new villains to overcome and crimes to solve? Or does it start recapping the recaps themselves in an ever-tightening spiral until Dick Tracy shrinks to a single image, of a solitary rat nibbling on the last morsel of a villain, every day forever? 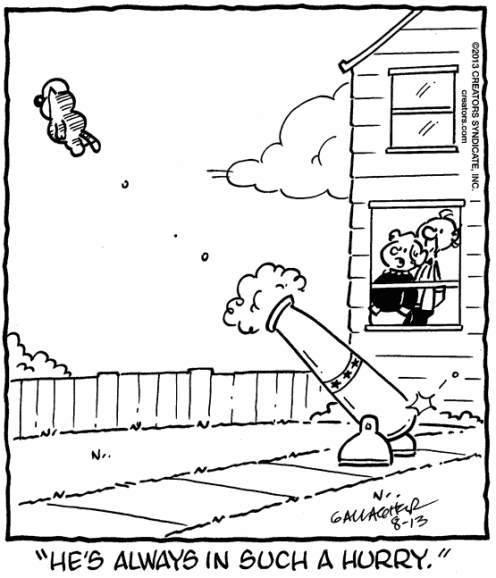 BOOM, I’m outta here — apparently, I’ve been selected for some sort of honorary program, and I don’t want to be late for my initiation! Josh returns Wednesday morning with more of the rich, savory comic goodness you’ve come to expect from the Comics Curmudgeon. Thanks!