MYSTERY SOLVED, everyone! “Senator Mason” is just the evil senator from the last senator storyline wearing an extremely clever disguise (i.e., a fake mustache). He clearly worries that Mark will eventually see through it, though, which is why in panel two he keeps a tight grip on his daughter to keep her between him and Mark’s fists at all times, while she further distracts him with rambling nonsense. How old in Anne Marie supposed to be, exactly? 40? 14? Whatever, she remembers good ol’ Andy. Why didn’t Mark bring Andy to meet with the senator? I genuinely want to know the answer to this question. There isn’t a rapacious politician in the pocket of the oil industry alive who can’t be charmed into environmentalism by a lovable big dog!

Last week’s Crankshaft, which featured a pleasant person discomfiting the unpleasant main characters in the strip, was downright cheery, and we can’t let that stand in the Funkyverse. This week: innocent children ask an old lady a series of increasingly rude and awkward questions! By Friday, we’ll get to “So nobody’s ever loved you? What’s wrong with you? Aren’t you sad that you’re going to die alone?” 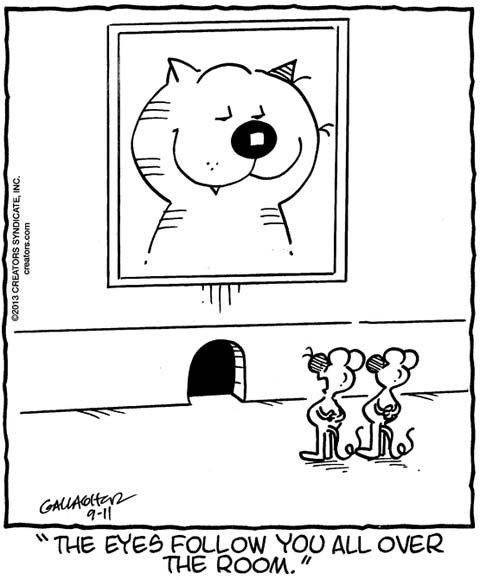 Sure, it’s pretty disturbing that Heathcliff is putting up giant portraits of himself everywhere in order to inculcate a Mao-style cult of personality, but it’s a step up from forcing his minions to carve idols of him out of food and worship him as an actual god.