I am completely in love with conversation between Mark and Senator Mason because it’s like a conversation between an environmental activist and a pro-oil senator two or three parallel universes over, where the issues are pretty much the same but the ossified political vocabulary consists of an entirely different set of signifiers. “Beautiful areas!” “Outdoor people!” I sincerely hope that every senator from now on starts referring to those supporting environmental protection as an “outdoor people” and those supporting increased exploitation of fossil fuels as “indoor people,” kind of like the difference between indoor and outdoor cats. Of course, this whole surveying business may just be part of the senator’s plan to enclose most of America’s population under vast domes; the few remaining “outdoor people” will be left to fend for themselves, presumably eventually accepting the absolute rule of Mark as their Outdoorsman-in-Chief.

So this year’s Gil Thorp football plots appear set: the A plot involves a hulking behemoth who refuses to speak to anyone and therefore can’t shore up Milford’s sorry offensive line, and the B plot involves Tip the gymnast, who is deigning to grace the cheerleading squad with his nimble presence. Tip’s first order of business: hurling a cheerleader into the flaming maw of the fall Milford bonfire, a sacrifice to the Gods of Football. The Mudlarks have a bonfire every single year, not that it helps much. Have they considered that maybe they’re worshipping a false pantheon, and that Gil is a fraudulent messiah? 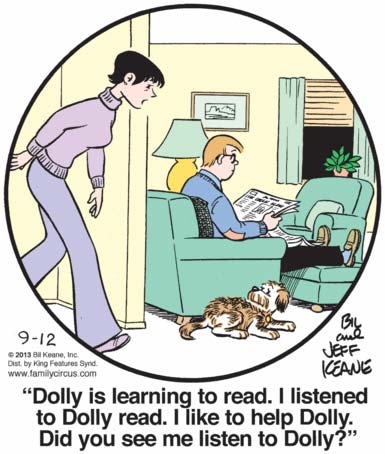 Oh dear, it looks like Mommy’s mind has been annihilated! Hopefully we’ll find out if this was caused by powerful prescription tranquilizers, a nefarious CIA hypnosis scheme, or just her daughter’s irritating and relentless voice.

Let’s ignore the joke in today’s Momma (not hard!) and contemplate Thomas’s pants for a minute. Is he supposed to be wearing camo pants? Camo pants and a polo shirt and, like, a kepi? This is a guy who shows up for dinner at his mother’s in a suit and straw boater, but now he appears to be going horribly, horribly casual without any guidance or sense of decency.