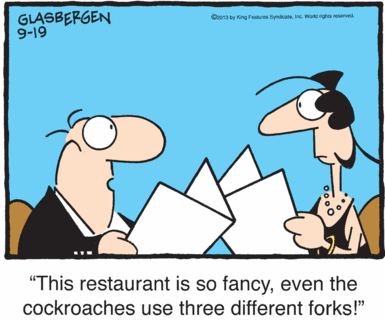 Boy, those sure do sound like sophisticated cockroaches! Just scuttling all over the place, their dark red chitin gleaming in the light, their awful legs somehow capable of wielding tools now, humanity’s only advantage gone in a stroke. Three forks waving about like their antenna, and yet still they can achieve a sort of rolling, lopsided locomotion with their other three legs. The forks plunge into food, into garbage, into feces, into anything even vaguely organic, because the cockroaches can eat all of it. They can eat it even faster, now that they’ve figured out how to use forks. They’re getting bigger. They’re getting stronger. They’re biding their time, but they won’t have to bide their time for much longer.

“Personal interest” is supposed to imply that Johnny is on the payroll of some sinister big oil conglomerate, and this implication will turn out to be true, because storytelling in Mark Trail is 100% linear and has no room for narrative feints or misdirection of any kind. But still, Johnny’s real personal interest — his personal passion — seems to lie not so much in loving oil but in hating wildlife. Stupid, stupid wildlife. In the end, he doesn’t care if fracking poisons the water table or if nuclear waste irradiates the forest or if strip mining just peels the entire ecosystem right off the face of the earth, as long as something kills a bunch of animals, and the more quickly the better.

One way to write a story is to have all your characters be extremely unlikeable!