Oh, man, this is just another example of the shameful criminality within the Rat family, in which even their charming mating rituals are indelibly tied up with theft. It’s too depressing to think about, so let’s all just enjoy Max Mouse on his skateboard, shall we? Wheee! That sure is a radical and extreme way to get to a crime scene, Max!

This strip made me laugh longer and harder than anything that appeared in the comics all last week. Tommie, one of the ostensible main characters in this strip, hasn’t appeared since May, but don’t worry, she called in a couple weeks ago to let us know that she’s OK, it’s just that nobody told us because Tommie is mind-numbingly dull. Also, don’t forget that Tommie is taking her exotic, exciting, and now-extended Italian vacation with her mom, which, much love to my mom and all other moms out there, but it’s kind of par for the Tommie course, you know? Or maybe I’m being too judgmental. Maybe Tommie and her mom have found hot matching age-appropriate (or even age-inappropriate) Italian men to seduce and have extended their stay so that they can better enjoy their cross-generational Italian sex idyll. (Just kidding, that would never happen, because Tommie is the boringest person alive.) 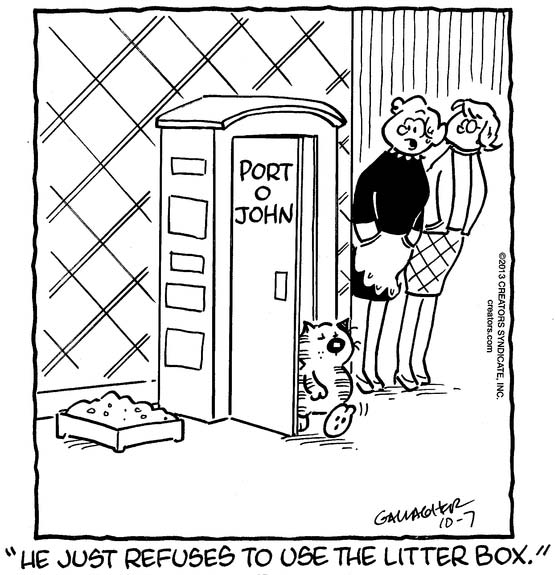 “He also refuses to use the flush toilet, despite the fact that he’s obviously fully capable of doing so. I guess he really wants us to keep having to deal with disposing of his poop, because, as noted, Heathcliff is kind of an asshole.”