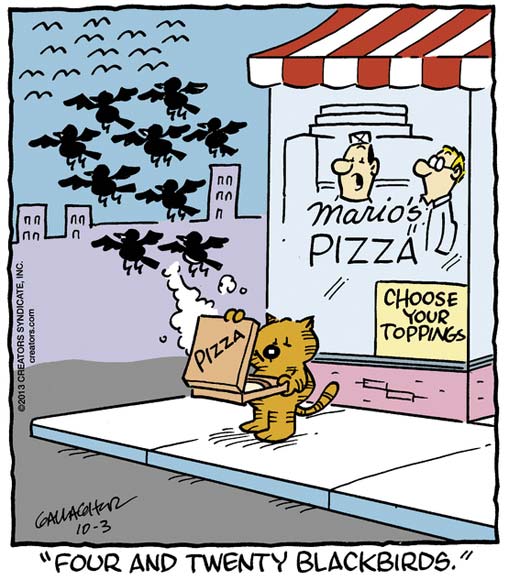 Of the 24 blackbirds that had been captured, stunned, and laid atop a disc of pizza dough just before it was shoved into an unbearable hot oven, 23 somehow survived the hellish inferno and emerged with enough strength to fly off when Heathcliff opened the box. They were horribly burned and forever traumatized, to be sure, but at least they had avoided the grisly fate awaiting blackbird number 24. Perhaps it had mercifully succumbed during the baking process; but perhaps it was still conscious, covered in cheese and sauce, too weak to move, but still terribly aware of Heathcliff looking down at it, not even with hunger, just with cool, heavy-lidded detachment. He would be eating that last blackbird, oh yes. In his own time. In his own time.

You can’t even imagine how happy I am to see Spider-Man smugly announce he’s going to use one of his bona fide superpowers, and then fail really ostentatiously, while producing a hilarious “NHHHNN” noise. It’s like they wrote this strip just for me! “I loosened it for you” is what you say as a joke when you try and fail to open a pickle jar and then someone else opens it easily, by the way. Anyway, I hope that our poor sad-eyed webbed-up guard was able to derive at least a little bit of satisfaction from this whole scene.