New adventure in Mark Trail, everyone! This week we’ve seen that it’ll revolve around the most hoary Mark Trail MacGuffin — Indian artifacts, and the stealing thereof, a staple of this strip that I’ve been detailing since the very earliest days of this blog. Still, I’m enjoying the pleasingly noirish setup here: two ex-cons, one literally just hours out of prison, drinking frosty mugs of beer, discussing their Last Big Score. The sad faces and the five o’clock shadow and the hunched shoulders make for nice atmosphere and maybe we’re even getting some foreshadowing that Jared will turn away from a life of artifact-napping before it’s too late (seriously, can you really believe anyone named “Jared” would be an unredeemable hardened criminal), but personally it’s the frosty mugs of beer that I’m fixated on here. I’m all the more fixated because a colorist’s error in panel two has made Jeff’s sleeve blue instead of brown, which makes it look like Jared’s arm is twisted around at an impossible angle, all the better to slosh beer foam everywhere, I guess. 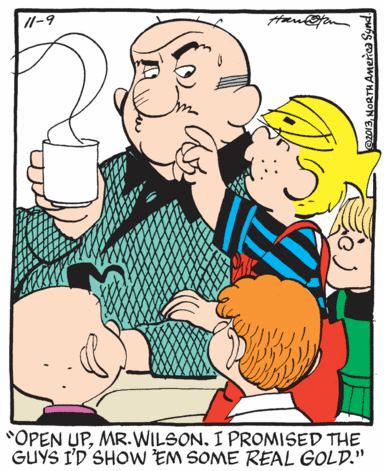 Dennis and his awful band of child thieves are going to seal Mr. Wilson’s gold teeth right out of his head.