So Jeff and Jared’s Sinister Artifact-Napping Plan is going something like this: they woke Mark up at gunpoint and Jeff took him off with the artifacts by canoe, with Jared left behind fake-tied-up claiming that Mark is the one doing the kidnapping! I have literally no idea why they think this will work out any better for them than just fleeing with the artifacts — wouldn’t the police have a bit more urgency in tracking down a kidnapping victim than they would in looking for some stolen property? — but I’m super glad things are playing out like this, because we finally get to see Cherry explode into the violent rage that we all knew was lurking just below her placid/heavily medicated surface.

Say, remember when Judge Parker Senior’s terrible airport-bookstore thriller got a bad review from a snooty academic, and he raged about it for days and days in a way that reaffirmed that he was thin-skinned and unpleasant, and then by crazy coincidence he and Katherine were seated with said snooty academic at dinner, and he lied about his name so he could glower at her in secret? Kind of the sort of behavior that might make you think, “This man is an awful person and not a strip protagonist that we want to see rewarded,” right? Well, screw you, loser. Judge Parker Senior has now revealed his identity to this lady and has publicly humiliated her and prompted her husband to do so as well! So all’s well that ends well, for assholes! 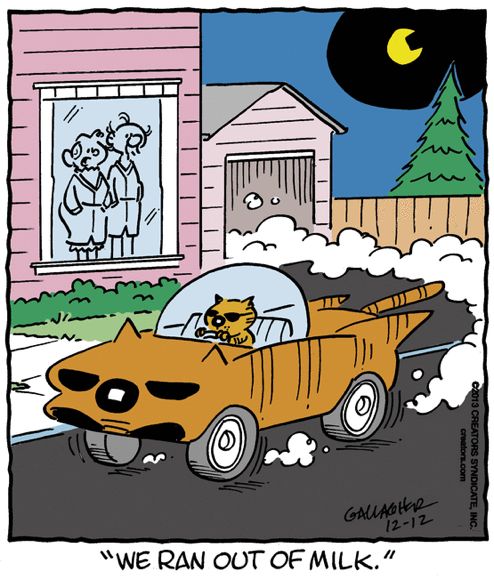 Soooo … is Heathcliff driving off to get more milk, or abandoning these non-milk-having chumps in a huff and finding a new family that knows the importance of keeping the refrigerator properly stocked? I’m guessing the latter, based on the don’t-give-a-damn vibe radiated by the cat and the car, which are both wearing sunglasses, in the middle of the night.