Oh goodie, Mary is hitting the “NEW YORK IS THE GREATEST CITY IN THE WORLD” fugue state many visitors achieve when they’ve been there for a few days, assuming they haven’t been permanently turned off by the density or the people or the smell. Look at how blissfully happy she is shoving that delicious cheese ’n’ grease triangle into her grinning teeth in panel one! We all know she won’t have the nerve to actually up and move to New York, but look for her to sigh theatrically and talk about how everything in Santa Royale is so lame compared to New York for weeks after she gets back. (She’ll be right.)

I guess “Elf Marvy” is supposed to be Marvin’s dream elf name, à la Hermey the Elf from the Rankin-Bass Rudolph special? Or maybe “Marvy” is just the cool nickname that he’s always wanted but nobody will give him, because it has the same number of syllables as “Marvin” and also nobody likes him enough to give him a nickname. Anyway, Marvin this week will be relentlessly hammering home some dumb joke where Santa Claus becomes one of the Duck Dynasty people, so brace yourself for that. 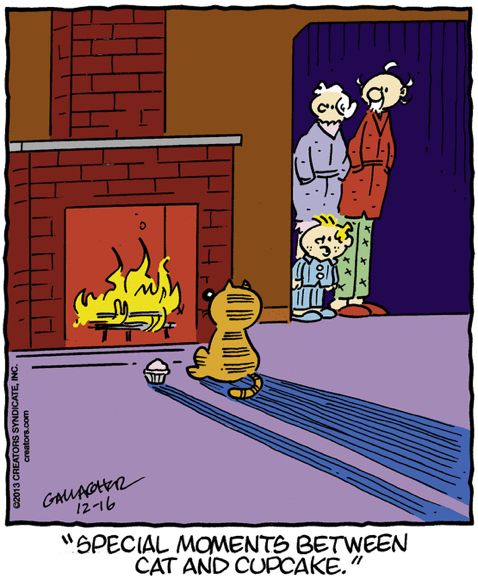 I’m not sure what possible interpretation of this cartoon is more unsettling: that Heathcliff is going to fuck this cupcake, or that he’s going to eat it, with the visual tropes of romance being a metaphorical lead-in to eating it.