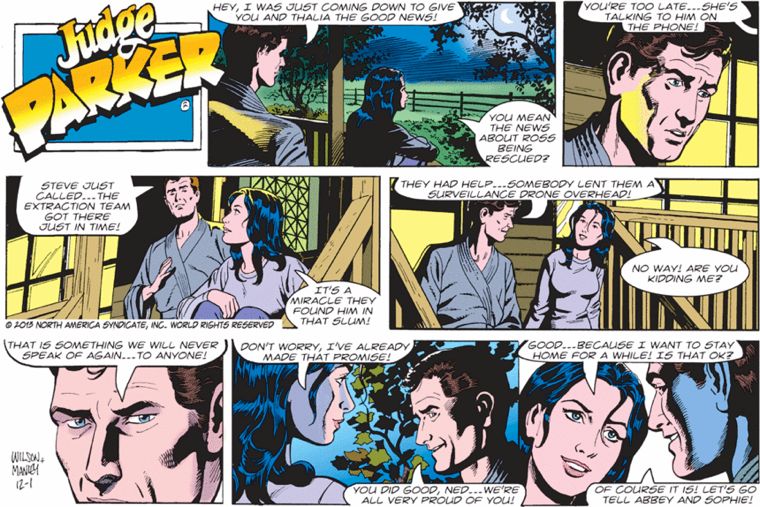 Congratulations, Judge Parker! You’ve offered us many tantalizing hints that the story of Neddy’s Kidnapped Do-Gooder Friend And His Sad Wife might end in some interesting way: that they might be scam artists, that the husband might be a scam artist without his wife’s knowledge, that Neddy might have to part with enough of her trust fund to make a dent in her lifestyle to pay the ransom, that there might be some moral dilemma involved in sending heavily armed U.S. special forces into a densely populated city, etc. But instead, you stuck to your core competency: none of that happened, and the plot was wrapped up as boringly as possible, even considering said wrapping up involved the phrase “extraction team”! Obviously we don’t actually get to see all this derring-do; if this strip isn’t going to even bother showing us a main character’s triumphant cheerleading routine, it certainly isn’t going to let us see a bunch of people we barely even know shooting guns and/or getting shot. I guess there could be more to this, but the final panel sure seems to promise more boring times to come, unless you find the idea of obscenely privileged twentysomething heiresses dropping out of art school and moving back in with their easily irritated parents exciting. (Having typed that out, I think I might actually find that exciting, so hooray for Neddy’s return, I guess?) 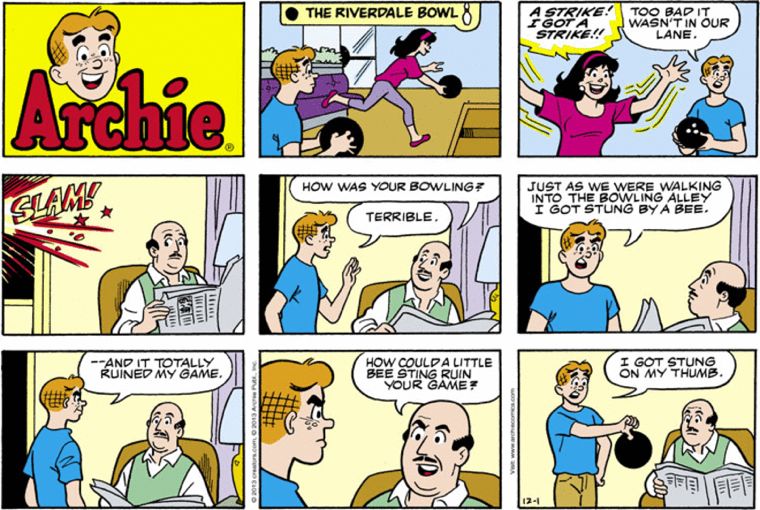 This is a good example of a cartoon where the throwaway panels at the top entirely change the complexion of the strip. Notice that Archie says that he was stung by a bee as he was walking in to the bowling alley. Either those throwaway panels take place in the moment just before he made the fateful decision to stick his rapidly swelling thumb into the bowling ball, or, more likely, he’s just in a foul mood because once again he’s gone on a date with Veronica that’s amply demonstrated that they’re totally different people and he actually finds her quite irritating and he’s really only attracted to the idea of her, but he can’t admit that to anybody, not even himself, so instead he’s come up with some completely cockamamie story so he doesn’t have to talk about what’s in his heart. 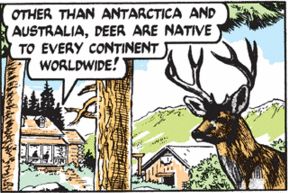 “Deer are native to every continent worldwide! Except for, you know, two of them. Out of seven! But still, that’s solid 71% continent coverage. Good job, deer!”